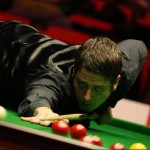 SET TO FIGHT IN CO-FEATURED BOUT TO

Guerrero vs. Aydin is presented by Golden Boy Promotions in association with Arena-Box Promotion and sponsored by Corona, DeWalt Tools and AT&T. The SHOWTIME CHAMPIONSHIP BOXING telecast will air live at 10:00 p.m. ET/PT (delayed on the West Coast) with Shawn Porter facing Alfonso Gomez for the NABO Welterweight title in the co-featured fight. Preliminary fights will air live on SHOWTIME EXTREME® beginning at 8:00 p.m. ET/PT.

With over 275 victories to his name, Akron, Ohio’s Shawn Porter (19-0, 14 KO’s) is known as one of the best amateur boxers of this era, and now he’s proving that he has the goods in the professional game as well. Unbeaten in 19 fights since his debut in 2008, Porter has already nabbed two regional titles, the NABO junior middleweight crown and the NABF welterweight belt, en route to announcing his arrival at the elite level of the game. On April 28, he scored his first win of 2012 with a sixth round technical knockout over Patrick Thompson, but he now has his sights set on making a definitive statement by beating perennial contender Alfonso Gomez on July 28.

An undisputed fan favorite whose action-packed battles have thrilled fans for years, Alfonso Gomez (23-5-2, 12 KO’s) has come a long way since his stint on NBC’s boxing reality show “The Contender,” and the 31-year-old from Guadalajara, Jalisco, Mexico who resides in Los Angeles has plenty to offer in the welterweight division. The winner of five of his last six fights with his only loss coming in a courageous effort against 154-pound World Champion Canelo Alvarez last September, Gomez knows that Porter will meet him in the center of the ring and fight on July 28, and that’s just the way he likes it.