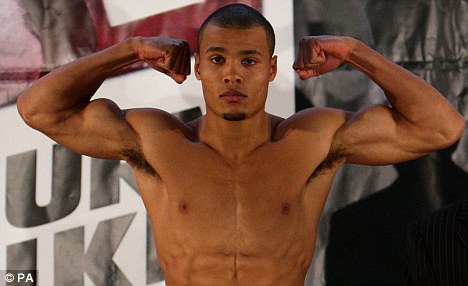 Ringnews24.com: Could you tell us a bit about your amateur background?

Chris Eubank Jnr: 26 fights, 24 wins. I won the Nevada State Golden Gloves and Western Regional Golden Gloves in the US. In England I won the 2011 international Haringey box cup tournament

Why did you turn Pro now, with the Olympics in London only months away, was it not possible for you to make Team GB?

Chris Eubank Jnr: To get on the Olympic team you have to fight and train in England but for most of my amateur career I was in Las Vegas. It meant there was no guarantee I would have made the team so I did not want to risk losing out on the high quality training I was getting in the states to come back to England to pursue the uncertain Olympic route.

Ringnews24.com: On your debut you came out to Tina Turner’s “Simply The Best”, possibly the greatest entrance song of all time. Will you be keeping the song as your entrance music throughout your career?

Chris Eubank Jnr: I can’t tell in the future but for the time being that will stay as my entrance song.

Ringnews24.com: You have now had two fights, do you get pre-fight nerves? and what do you do to help battle these nerves?

Chris Eubank Jnr: I don’t get nervous… I may get a bit anxious waiting in the changing rooms wanting to get out there and perform, buts that’s about it.

Ringnews24.com: You looked very impressive on your debut, how did you feel the fight went?

Chris Eubank Jnr: It went perfect, boxed well, got my combinations off and felt great.

Ringnews24.com: You learnt a lot with the Jason Ball fight, were you happy with you performance considering you fought it mostly one handed?

Chris Eubank Jnr: Mostly? I didn’t throw a single right hand so the word you are looking for is ‘completely’ one handed. And, yes, I was very happy with the performance, beating a tough experienced opponent with only my left is something to be proud of and will never be forgotten throughout my career.

Ringnews24.com: You have now completed two fight camps, how do these camps compare to the amateur training camps? Do you have any favourite exercise or least favourite?

Chris Eubank Jnr: The camps are the same, but as I progress as a fighter I will increase the difficulty/intensity of the training as I get stronger… I always try to push myself to the limit. Sparring is my favourite exercise… everything else is secondary.

Ringnews24.com: Being on channel 5 is giving you great publicity, its an opportunity to get recognized so early on how do you feel about being in the spot light so early on in your career?

Chris Eubank Jnr: I’m happy to have so much exposure so early on in my career. It’s a great thing for the fans to see me grow as a fighter and it’s great that boxing is back on terrestrial TV where the general public are able to get a look at the sport without having to pay. Having all these eyes on me pushes me to train and fight harder.

Chris Eubank Jnr on his dad

Ringnews24.com: Chris, having such a famous fighter as a father do you think this will hamper your career, as fans may expect to much early in your fights?

Chris Eubank Jnr: It is an advantage having a famous father.. I know I have skills. I’ve learnt my craft and because I have a name on top of that I have the opportunity to showcase my fighting ability to millions of people… what more can a fighter ask for.

Ringnews24.com: Do you feel any pressure to achieve as much as your father did in the ring?

Chris Eubank Jnr: All I have to do is worry about myself, not about my father.. if I can do that (which I can) I will be fine.

Ringnews24.com: Your dad has a great knowledge in the game. It must be great always knowing hes available for advice, what advice has he given you so far?

Chris Eubank Jnr: Be your own man.

Ringnews24.com: Have you considered going to the USA like your father did, to gain his early experience in the fight game?

Chris Eubank Jnr: I will fight wherever I can to gain the most experience possible.

Ringnews24.com: Your fathers been involved in so many great fight’s what is your favourite fight of his and why?

Chris Eubank Jnr: Even though it ended in tragedy, the Watson II was the most impressive. He showed more heart in that fight than most fighters do in their entire careers.

Chris Eubank Jnr on the Future

Ringnews24.com: What are your plans for 2012? How many fights do you think you can fit into the year?

Chris Eubank Jnr: I am looking to fight at least 5 more times this year.

Ringnews24.com: How fast do you hope to push for the Lonsdale belt and other titles? do you have a time frame in mind?

Chris Eubank Jnr: I take each fight as they come; I don’t look past anyone. I will fight for a title when I am ready and the time is right.

Message for the fans

Ringnews24.com: Finally, do you have a message for your fans?

Chris Eubank Jnr: I’m not old school like my father and I’m not new school like most other fighters, I’m my own school… So get ready to attend.