The weekend and subsequent week has concentrated a lot on a certain fighters retirement and in Britain, on the forums, the unsuccessful world title attempt by George Groves and, of course, Anthony Joshua’s absolute decimation of Scotland’s Gary Cornish, which whilst all worthy news stories had seen the highly anticipated third bout between Dave “Rocky” Ryan and John Wayne Hibbert take a back seat. The Commonwealth and WBC International Super Lightweight titles were on the line at the O2 Arena, Greenwich, London. The hook for this one was the absolute barnstormer they served up in May of this year. “Rocky” emerged the victor in that one, in a fight that if you haven’t seen you need to go and do so as any description will not do it justice at all. 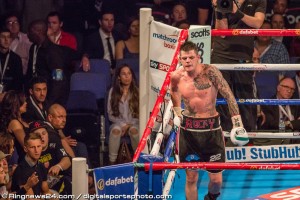 The lead-up sizzled nicely as both men declared how confident they were with winning and both camps going very well and fans talking up their men over social media. Without seeing it you could say it needed some bite but the respect seemed to add another level to it, as the neutrals didn’t really want any man to lose yet we all know it had to happen for someone to really move onto the next step. Rumours were swirling (and mentioned during the bout) that this was Hibbert’s last bout on his Matchroom contract and the result would determine whether he was to be considered worth resigning. Whilst he himself, has stated he did give some thought to whether he would continue if he lost. Either way he was 100 percent focused on the struggle ahead.

Having their man win the previous two occasions (the first must be said was a point’s decision that really could’ve gone either way depending on who you talk too) had Ryan’s fans in high hopes and I myself had a little message written out to Hibbert (16-3, 10 KOs), urging him to carry on, if he was unsuccessful. The fight started very cagily with the wily Ryan (17-9, 4 KOs), just outpointing Hibbert with a heavy flurry landing at the end of the round. No problem, it’s about to explode were the messages across social media platforms until it settled into a pattern of Hibbert being stalked around the ring whilst Ryan kept out of reach. It must be said it was turning into a shutout come the seventh round as Ryan had nullified everything that was thrown at him. Hibbert’s face had started to mark-up badly, he looked out of his depth, out of ideas and extremely nervous. Then around halfway through the sixth round, “Rocky” landed a huge body shot which sent waves through the stadium, as Hibbert took a knee and looked like he wouldn’t get up. I’ve watched it over and over and still have no idea where he got the strength and heart from, but Hibbert took the 8 count, got up and survived for the rest of the round. 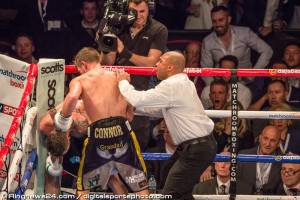 The seventh round started similar as Ryan kept the initiative going but his punches started to seem a bit ragged whilst Hibbert must have decided he had nothing left to lose and started to pile on the pressure, bit by bit. The eighth saw another back and forth round, with Ryan edging it for me but I was rubbing my hands as the tension was in the air and you knew it was starting to get spicy. Hibbert had no way of winning on the cards, without at least a knockdown and he was going for it. The ninth finally saw Hibbert take over, as he crashed punches into Ryan and wobbled him a few times, Ryan tried to take control but you sensed Hibbert knew he had a job on his hands and was going out as the winner or going out exhausted, having given everything he could. The noise in the stadium had grown as the southern crowd could feel their man turning around but then disaster for everyone, Hibbert hit a short hook, Ryan then stepped to the left and pulled up immediately reaching his hand behind his back. Hibbert seemed momentarily confused and then went in for the finish, he thudded 3 punches into Ryan’s sides who immediately took a knee telling the ref his back had gone. He then did the unthinkable and rose to his feet ready to go, unfortunately it became apparent that there was no way he could carry on as Hibbert went in for the kill and the referee Ian John Lewis called it off to rapturous applause in the stadium. An overwhelming celebration from Hibbert and his team and a stunned silence from Ryans fans (including myself) at home. The first thought that passed through this writer’s head was ‘Bullshit’, the fight shouldn’t have ended like that and it shouldn’t have been given to Hibbert, this was made worse after seeing the interview and Hibbert declaring he didn’t think there’d be a rematch, Ryan could have the 2-1 and that it was redemption. 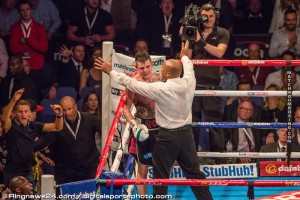 Now I will admit that this had me furious, at first, but after taking a bit of time out, I put my neutrals head on and watched the highlights and interview again and I realised a couple of things. The first was that if the commentators were mentioning it was his last fight under Matchroom, then that must have been playing on his mind and I’d heard the rumours that he was considering calling it a day – which must also have been a thought. He’d looked extremely nervous and was outclassed for the first seven rounds and had been dropped hard. So, I can only guess at how he was feeling, but he still got up and he still came out, and more importantly he came to fight, he was willing to put it all on the line in them last rounds and it was shaping up to be at least as good as fight no.2.

There’s an argument for and against the hook causing the damage but Hibbert did what he had to do and ultimately prevailed. He celebrated because he knew it was maybe the ‘last chance saloon’ but he’d live to fight (and let’s not forget provide for his family) another day, and finally ‘that’ interview. Looking back at it he gave Dave Ryan the absolute utmost respect throughout, he was laughing whilst he said there’d be no rematch acknowledging that he was happy the series was 2-1 to Dave as ‘He’s one hard bastard’ he knows it’s a tough match and that maybe Ryan is his ‘Kryptonite’. And finally, the one word that has caused a lot of people to flip out ‘Redemption’ did anyone stop and think that maybe he was talking about the firstt fight, the one Hibbert, his team and his fans are adamant he won? If so, it makes perfect sense and even if not, with the respect he and his team have for Ryan and his team there’s no way it was meant as a slight. 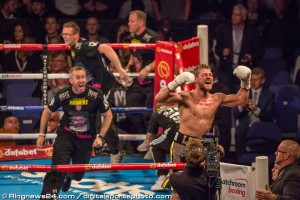 After that I applauded, I might have looked daft but both men had earned my applause, my respect, and my regret that with everything going on elsewhere this would be overlooked and may just cost us the chance to see these great gladiators go through it for a fourth time.

I sent a message congratulating Hibbert whilst stating I thought he got lucky (whichever way you look at it, he did but that’s not to say he wasn’t going to stop Ryan in the final rounds as he really turned it on), and commiserating Ryan. I then went on Social Media to share my thoughts and was extremely annoyed to see fans from both sides bickering at each other and disrespecting the two men that had just battered each other for our entertainment. So much so that I posted the following on Facebook:

Am really disappointed today, watched John Wayne Hibbert wrench the title away from Dave Ryan in a bout he was losing by a lot. He’d started to turn it on and looked like we could be in for a cracking final stretch. Unfortunately Ryan hurt his back and was stopped after a wicked punch to the sternum (IMO it was his back not the punch that done the damage). JWH was declared the winner and celebrated. Well done to him. He acknowledged afterwards how tough Ryan was and in my eyes gave him the world of respect by (laughing) and stating that he didn’t want the rematch (acknowledging that Ryan is a tough test for him imo.)
Firstly to Hibbert’s fans, whichever way you look at it John got a bit lucky with the injury and was in no way in front at that point (I had him making a comeback but that’s by the by).
To Ryans fans, It isn’t Hibbert’s fault that Dave got injured and if it is then it’s a very well deserved win (can’t have it both ways,)
Both fighters have given their all for you and both deserve everyone’s respect 100 percent. To pass the other off as anything but a star is wrong in my opinion and it’s about time we all congratulated Hibbert and wished Dave a speedy recovery before hoping they get it on for a 4th time. (40/40 split with the winner getting the rest)
Congratulations John, you’re a superb warrior and a great boxer. I look forward to seeing your next bout whoever it’s against.
Get well soon Dave, exactly the same to you. You both do the British scene proud. 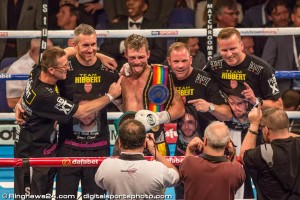 I’d obviously hit on something as a lot of fans messaged me to say thanks for stating something that needed to be said, and it was good to see some people giving the fighters the respect they deserve. We need to remember sometimes that these people put their bodies on the line for us and especially these days, we don’t often get too see two people like these, with the utmost respect for the fans and each other, battle it out time and time again for our pleasure. Dave Ryan should be applauded for getting up on that horse every time he’s been knocked off it and for getting back to the top each time, he’ll come again and I’ll be shouting in his corner once again. John Wayne Hibbert should be applauded for taking this fight for the third time knowing what a risk it was, he should be thanked for never giving up (I swear nine out of ten boxers would not have got up from that body shot) and for being open with his fans.

I for one thank the pair of them and can’t wait to see them in action again, hopefully the money will be put forward for a fourth fight and Mr Hearn, if your reading this let them headline their own bill I’m pretty sure they’d fill it.

No title for Adrian Taihia after bout rejected by boxing…