Adrien Broner looks to have pulled yet another boner by “attempting” to fight Khabib Allakhverdiev for the vacant 140lb WBA title somewhere in Cincinnati, Ohio on Saturday, October 3rd. Nobody has let on where they will fight yet as befits his diminished profile in boxing. His omnipresent sugardaddy Al Haymon has leveraged his influence to secure Broner yet another undeserved title shot after stinking up the Ring against Shawn Porter in spite of Porter being weakened by a catchweight of 144 lbs.

Meanwhile, the winner, Porter, sits idly on the shelf being ignored by top fighters and their promoters if you want a clue on how stuff works in boxing these days against the interests of some of their best fighters. I’ve never seen such an inept P4Per as Broner was touted by the Haymon/Gimpy/Golden Boy News of the Ring World only a couple years back. That sure didn’t last long as he continues to be exposed at the higher levels as not having a punch, he can’t box, he can’t really fight, and probably can’t dance, but like he stated to Larry Merchant earlier in career during an interview, “Larry, when they sign to fight Adrien Broner, I’m like dog doo-doo on their shoe. They can’t get me off them.” It’s telling that thus far the boxing public has been unable to get Broner off their shoes either.

Here’s Broner pulling a boner on anti-social media websites as he’s been doing in the ring with his career.

Kahbib may not register as a name with the general public, but this is another in a long line of very tough Russians these days who can fight as he proved in pounding the undefeated zero off Joan Guzman, a far more accomplished fighter than poor Broner. Don’t think Kahbib is signed with Haymon, but if not, it is a virtual certainty that he won’t get a decision over Broner unless he pounds him from from stem to stern and pillar to post with a few knockdowns thrown in like Maidana did. Kahbib does have the advantage of the better trainer here in John David Jackson which should help his cause immensely with the Haymon appointed ref in Broner’s hometown. 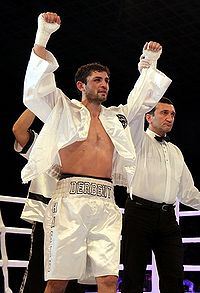 Kahbib recently lost a tight decision to Top Rank’s latest darling, Jesse Vargas, so he knows what he has to do here by staying patient and not getting frustrated as the ref pulls him off Broner anytime Kahbib is getting through. Just steadily hunt down to pound away and let the chips land where they may.

Sad that boxing these days has come down more to insider politics than actually fighting, but such are the historical cycles as this poorly managed sport is mostly circling the drain of ignominy with the general public these days thanks to boxing’s reprehensible monkey shines like The Dud TUE 49-0 non-event last week. At this point in time, boxing could be banned and nobody but the fractional remains of 1% would care.

On Being Ruskie~Roy Jones Jr
David “The Hayemaker” Haye – Who does he have to impress?
Read more articles about: Adrien Broner