As he nears his Saturday, Nov. 14 showdown against WBC Featherweight World Champion Gary Russell Jr. (26-1, 15 KOs), featherweight contender Oscar Escandón (24-2, 16 KOs) is primed and ready for the challenge.  The 12-round SHOWTIME CHAMPIONSHIP BOXING® main-event will be televised live on SHOWTIME (10:45 p.m. ET/PT, delayed on the West Coast), from Hard Rock Hotel & Casino in Las Vegas. The co-main event of the evening will see undefeated super welterweights Frank “Notorious” Galarza (17-0-2, 11 KOs) and Jarrett “Swift” Hurd (16-0, 10 KOs) in a 10-round clash.
Tickets for the live event, which is promoted by TGB Promotions, are priced at $155, $105, $80, $55 and $30, not including applicable fees, and are on sale now. Tickets may be purchased at the Hard Rock Hotel & Casino box office, by calling 888-9-AXS-TIX, or online at www.axs.com.
Less than one month after Russell Jr. and Escandon square off, SHOWTIME Sports® will present another high-profile matchup between elite 126-pound fighters as WBA Featherweight World Champion Jesus Cuellar defends against Puerto Rico’s Jonathan Oquendo on Dec. 5 from Barclays Center in Brooklyn.
While working out in Las Vegas with Coach Ruben Guerrero, Escandón gave his thoughts on training camp, fighting Gary Russell, and his quest to become a world champion. 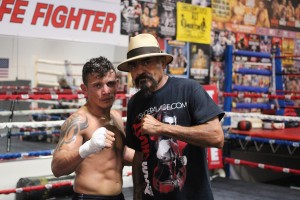 On his matchup with Gary Russell Jr.:
“Gary Russell Jr. is a very skilled fighter but he doesn’t know what it’s like to be in a rugged fight.  Everyone knows I come to fight and Russell is going to find out firsthand what it’s like to be in a war. He better be ready to take some lumps.”
On training in Las Vegas:
“Running in the high elevation here in Las Vegas has been great for my stamina.  I’ve adjusted to the atmosphere and my body feels extremely strong.  I’ve gotten some great sparring with a lot of different looks, guys that move like Russell. I couldn’t be more prepared then I’ll be for this fight.”
On working with Ruben Guerrero:
“Ruben and I have been working great together.  His knowledge of fighting southpaws is excellent and we have a great game plan going into this fight.  Everyone can expect to see me throw a lot of punches.”
On his quest to become a world champion:
“Becoming a world champion is something I’ve wanted my whole life.  I’ve been close a couple of times.  In those fights I made the mistake of leaving the decision in the judges’ hands.  This time around, I’m going for the knockout, to assure myself victory.”
On fighting on SHOWTIME:
“It’s great to be fighting on SHOWTIME.  This network is where all the greats have fought in the past.  I want to leave an outstanding impression on everyone watching at home.  I know with a victory, I’ll be back on the network.”
Vasyl Lomachenko on Koasicha: Every fight has challenges
Rocky Fielding believes his power will be the difference Saturday night
Read more articles about: Gary Russell Jr, oscar escandon