Undefeated super welterweight prospect Jarrett Hurd handed Frank Galarza the first loss of his career with a sixth round TKO in the main event of ShoBox: The New Generation on Saturday from The Joint at Hard Rock Hotel & Casino, Las Vegas.

Galarza (17-1-2, 11 KOs), who was fighting for his fourth time on ShoBox and favored against the relatively unknown Hurd, became the 136th fighter to suffer his first loss on the prospect developmental series.  VIDEO HIGHLIGHTS: http://s.sho.com/1NTILdM

Hurd (17-0, 11 KOs) was the sharper, more accurate fighter from the opening bell against the largely stationary Galarza.  Hurd floored Galarza with a huge right uppercut –his favorite weapon– with less than 30 seconds left in the fourth, knocking “The Brooklyn Rocky” down for the first time in his career.  Galarza made it to the bell, but was clearly hurt and never recovered. 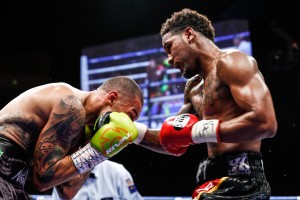 Hurd, of Accokeek, Md., blasted Galarza with another big uppercut in the sixth, forcing a clearly finished Galarza to turn his body away in defeat.  Referee Russell Mora had seen enough and stepped in to stop the bout at :59.

“I knew he was an experienced, tough fighter, but I stuck to my game plan, listened to my corner and came out victorious,” Hurd said.  “Once I was able to set up my counter shots, I knew I could hurt him.

“This was my first time on national TV and I knew how important it was to be successful.  I’d like to fight again soon, hopefully early in 2016.  I’m ready to take my next step.” 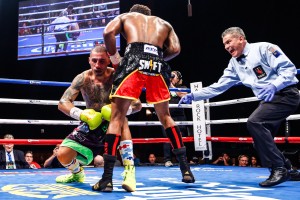 Galarza promised to be back after the crushing defeat.

“I tip my hat off to Hurd, he was the better man tonight,” Galarza said.  “I didn’t fight my fight and he did. This type of stuff happens in our sport.  I’m disappointed in my performance, but mark my words I’ll be back, better and stronger than ever.”

“It’s a crushing blow to Galarza’s career,” said ShoBox analyst Steve Farhood.  “Because of his late start in boxing and his age, he can’t afford a loss like this.  After the first round, he didn’t show any adjustment and lost every subsequent round.

“With that said, the story is obviously Jarret Hurd, who hadn’t fought a high level of opposition coming in, but stuck with a sound game plan, executed it well and showed no nerves in his national television debut.  He made a name for himself in stopping a legitimate tough guy in ‘The Brooklyn Rocky.’” 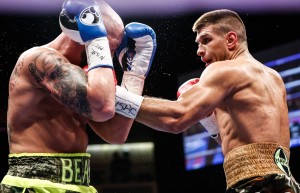 In the ShoBox co-feature, blue-chip prospect Sergiy Derevyanchenko defeated Jessie Nicklow with an impressive diet of body shots and uppercuts in a dominating, third round TKO.

Derevyanchenko (7-0, 5 KOs) attacked Nicklow from the outset, landing an astonishing 72 percent of power punches and 56 percent of his total shots.  The durable Nicklow, who took the fight on short notice, could do nothing against the former Ukrainian amateur standout.  In the third, Derevyanchenko backed Nicklow (25-8-3, 8 KOs) against the ropes and unleashed a series of punishing shots against a defenseless opponent, forcing referee Jay Nady to step in and halt the contest at 2:18 of the third.

“This was a great performance by me,” Derevyanchenko said.  “Jessie was a very tough opponent.  I feel like I showed another element to my game tonight.  No one has done to Jessie what I did to him tonight.

Benavidez (11-0, 10 KOs) had no trouble facing his most experienced opponent to date, knocking Romero (15-10-1, 9 KOs) down with a series of lefts to the body and head with less than a minute into the fight.  Romero got up, but Benavidez continued to pepper Romero and floored him again with a left hook to the body.  Ramirez again beat the count, but only lasted a few seconds before Benavidez finished him off with this third knockdown in just two minutes.

“I know how strong my body shots are and I knew they would be effective,” Benavidez said.  “I wanted to make a great impression in my first nationally televised fight.  I’m ready to get back in the ring gain as soon as possible.” 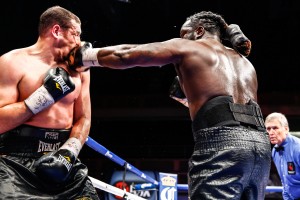 “I feel good—it was great to be back in the ring again,” Stiverne said.  “I wasn’t rusty, but maybe I sparred too much in the gym.  He was a tough guy.  The knockdown was more of a flash knockdown.  It was a good punch, but I was a little off balance, too.

“I’m ready to get back in the ring soon and work my way back to become a world champion again.”

Stiverne was knocked down with 10 seconds left in the first round.

The ShoBox tripleheader will re-air on Monday, Nov. 16 at 10 p.m. ET/PT on SHOWTIME EXTREME and will be available on SHOWTIME ON DEMAND® beginning Sunday, Nov. 15.