The most recent $2000 Throwdown Fanatasy Boxing Game winner (Leftjabcross) is on a roll to close out the 2015 season.   He won the $2000 #JacobsQuillin game with 385 points, marking the second time in the last three games he topped everybody, to earn bragging rights as well as the $400.00 first-place prize.

A total of 223 players competed and the winning total was a mere two points better than four players who finished in a second-place tie worth $130.00 each.

Here’s a close look at the winning team: 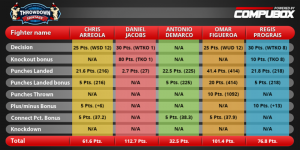 The #JacobsQuillin game ended up as a six-fight pool due to the cancellations of two fights, Chudinov-Sturm and Breazeale-Martin.  Thus, only 12 fighters were in the final group, resulting in a much better chance of selecting the winning five-man team.

The other top 10 players in scoring also picked four favorites but only the 10th place finisher (Djholman7) picked the same four favorites as the eventual game winner. The determining factor was their respective underdog choice, DeMarco and Erick Bone ($4,300).

On paper, Bone appeared to be the wiser choice than DeMarco, largely based on the knockout percentages of their respective opponents, Chris Algieri (40%) and Figueroa (72%).  Figueroa-DeMarco turned out to be a firefight with both fighters throwing and landing powerful punches.  DeMarco was unable to catch front-running Figueroa, but he did land 225 of 587 points for 32.5 critical points, the most ever by a fighter in a losing effort.

The game winner was the lone top 10 finishing player to select DeMarco.  Others went with either Bone or Travis Kauffman ($4,500) vs. Arreola.  Kauffman did score 30.5 fantasy points, only two less than DeMarco’s total, which was the game winner’s margin of victory.

The lesson learned in this game was that, if you can pick only four favorites on your team due to salary restrictions, choosing the correct underdog is key because a losing fighter could be the difference between winning or losing in Throwdown Fantasy Boxing.
Throwdown Fantasy Boxing, online at www.ThrowdownFantasy.com, is boxing’s newest way to back up fight predictions and simple to play. In fact, it’s as easy as 1-2-3: 1.  Using the $25,000 salary cap, pick five fighters from the game group; 2. Scoring may be tracked in real time, earning points for wins, knockouts and other CompuBox statistics, 3. Scoring the most points wins. Most games last a week and each has multiple winners.  Click on this link to watch a short video to learn how easy is to play:

Fighters receive points based for how they perform, rewarding each style of boxing (see below chart). CompuBox fight statistics are available for research to aid in making selections at www.ThrowdownFantasy.com.

New players who sign up now can receive FREE entry into Throwdown Fantasy Boxing’s monthly Free-roll game, in which Throwdown Fantasy provides a $250 free roll that players may enter using Throwdown Points (3 free entire upon registration) and $25.00 free game. Signing up and playing is free. People may register to play for free and then move onto paid games.

There is something special about Saunders
Nicholas Walters and Jason Sosa HBO Fight Week Quotes
Read more articles about: