Tonight at the MGM Grand Garden Arena, Gilberto “Zurdo” Ramirez immortalized his name in the history books by becoming the first Mexican to win a world championship in the division super middleweight, after dethroning the now ex sovereign of the World Boxing Organization (WBO) Armenian-German Arthur Abraham.

Gilberto Ramirez exercised a stranglehold on a fighter whose record intimidates and strangers, and made running a tactical approach with which he found the victory by unanimous decision, the judges recognized scoring three equal cards 120-108 in his favor.

During the course of the war, the native of Mazatlan, Mexico, came close to liquidate stocks before the deadline of twelve rounds, but maintained discipline and stuck to the guidelines Zapari coach Hector told him from the corner.

“At all times I kept listening to the corner and making a smart fight, as they were showing me. We knew beforehand it would be a tough fight, Abraham was not any rival, he is an experienced opponent, in seconds you can change a result, “Ramirez said upon arriving in the locker room. 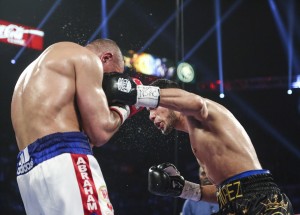 Near the end of the second round, the “King” Arthur let down his left hand after missing a hook and Gilberto did pay asestándole a curve just right on the chin, which made the German fighter is put in survival mode and would tie for cooling time.

In the seventh, Abraham feinting and ate a stab right again left him in poor condition. The “Lefty” was punishing mazatleco without stopping to think that apaleaba who was the most decorated super middle today. Ramirez was the master of the shares.

He not even happened problems when Arthur Abraham tried to take over the center of the ring to make it go longer stretches, as it moved freely and unpredictably.

“Today we work all that we train in the gym and the result was. I am very grateful to my team because I was being carried to another level. We are always talking about it and studying the fight we have in door, “he said.

Being world champion is a goal that reached tonight, but that does not stop the path Ramirez. Just he got off the ring and was already setting his mind on the next goal, which is to successfully defend the world championship.

“It’s the biggest fight of my life, the dream we both had hoped for and then to enjoy the moment and onwards to defend the title as if the flag of Mexico is out, whoever comes,” he concluded.