Undefeated blue-chip featherweight prospect Toka “T-Nice” Kahn-Clary (17-0, 11 KOs) continues to show improvement in each and every fight. Last weekend, the 23-year-old Liberia-native knocked out seasoned veteran Orlando Rizo (19-7) in the fourth round at Sportsman Lodge in Studio City, California.

Kahn-Clary, fighting out of Providence, may still be flying under the radar but he’s getting closer to becoming a breakout star. His most recent fight was his first scheduled 10-rounder.

“I put in a lot of hard roadwork, running seven miles a day, and (his head trainer) Peter (Manfredo, Sr.) really pushed me,” Kahn-Clary talked about preparing for his last fight. I got some good work from Javier Fortuna, sparring him a few times, and he’s a good southpaw.

“I wasn’t looking for a knockout but it just happened. I stepped left and threw a left. I didn’t load up but it was accurate, hitting him right on his chin. I was happy to get the knockout but I was looking forward to getting in some more rounds.”

“Nothing Toka does really surprises me because I’ve known since the beginning that he’s special,” Manfredo commented. “Toka continues to improve with each fight and he’s hungry to get to the next level. There’s no rush, he doesn’t turn 24 to next year. He’s still maturing. The kid he knocked out was Nicolas Walters’ main sparring partner.

“I just don’t want to put him in with the big names just yet. He’s maturing but he’s not all the way there. He’s improving all of the time, putting his combinations together better each fight. I’ve also noticed that he’s nice and relaxed in the ring now. He’s becoming a good boxer who always had power. Top Rank is doing a great job moving him. Everybody’s happy.” 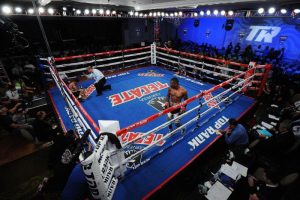 A decorated American amateur who had a 131-11 record, highlighted by a gold-medal performance at the 2010 National Golden Gloves Tournament, Kahn-Clary passed on a shot to make the 2016 U.S. Olympic Boxing Team to turn pro three years ago.

“I’ve been boxing 10 years now,” Kahn-Clary added. “Knowing what I’ve already accomplished, I also realize that I’m still improving. I’ll be back in the gym Monday to get ready for the next call we get about my next fight. (Top Rank’s) Brad Goodman is one of the best matchmakers in boxing. He and everybody at Top Rank are doing a great job positioning me for a big opportunity. That may not happen this year but, hopefully, it will sometime next year. I’m boxing so much better now than I ever did. I used to fight like I was in a fog but, now, my eyes are wide open.”

Not bad for a kid who left his mother and siblings in Liberia when he was six, only to have his father murdered a year after he arrived in the United States. He’s overcome many difficult obstacles in his young life, most of them tougher than any opponents he’ll every fight, including a stretch in which he was homeless. It’s only made him tougher and an even better overall person.