Shane Mosley came up short on Saturday evening against David Avanesyan to challenge for the WBA interim belt. The bout managed to last the distance with a faded Mosley unable to outmanoeuvre the younger 27 year old Russian fighter and shipped some heavy shots in the process, despite having former legendary boxer Roberto Duran as chief in his corner. The verdict was unanimous.

Shane Mosley should have retired a few years back but the former three weight champion continue to fight on, possibly to fund a messy divorce against his ex wife, Jin Mosley. Boxing has seen it many times when a boxer cannot let go of his former days when he was basked in glory, living in his prime with his attributes intact. It is anybody’s guess as to whether the Californian will decide to fight on but the one thing that is certain is that the man known as ‘Sugar’ has left plenty of memories, controversy withstanding.

And these are what we are going to focus on today. 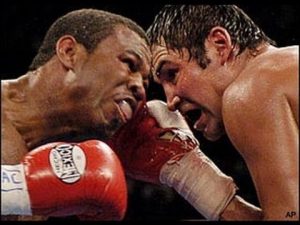 The Golden Boy, Oscar De La Hoya had not long suffered his first loss against Felix Trinidad, picking up one KO win over Derrell Coley before facing Mosley who came up two weights to challenge for the WBC and IBA titles. After a shaky start for Mosley he found a way to adjust and almost dominated De La Hoya, giving him one of only a couple of losses that you would call conclusive. Mosley would manage to beat De La Hoya again three years later although an altercation raised itself when it was found that Mosley had used an illegal substance for the fight, not forgetting the fact that many people saw him losing. 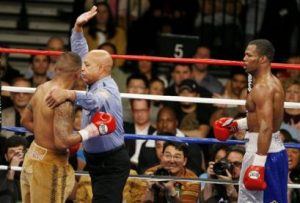 Mosley had already gained four losses by the time 2006 rolled around, losing repeatedly to Vernon Forrest and Ronald Wright twice. So when a fight with Fernando Vargas was announced, many knew that it would be a crossroads contest. Mosley was able to get his shots off faster than ‘Ferocious’ Fernando and the Oxnard fighter’s left eye began to swell as early as the second round. Mosley worked the eye continually and the bout was eventually halted in the tenth when the referee realised that the swollen peeper was affecting Vargas’ vision. Mosley managed to repeat his win in a rematch, winning inside six but from here on mixed fortune was waiting ahead for him as his declining years only advanced. 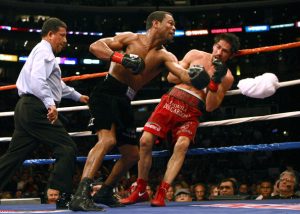 Antonio Margarito was making the first defence of his WBA crown that he rested from Miguel Cotto. And it was a night that was going to be remembered for eternity, even if for all the wrong reasons! Before the bout commenced, it was discovered that a foreign substance was found in the gloves that was wrapped around his hands in the dressing room a little while before. It was swiftly taken away to be analysed, however, the fight was allowed to commence! Margarito was going to receive even more bad news as an undaunted Mosley came out and battered him for 9 rounds, before the Mexican finally wilted. The substance found that evening was later confirmed to be something very similar to plaster of Paris. Margarito received a year’s suspension but has been unable to repair his reputation after that night. He probably never will and has made yet another return to the ring, his latest bout resulting in a points win over Jorge Paez Jr as of writing.