As the world mourns the loss of Muhammad Ali, Saturday night’s Premier Boxing Champions (PBC) on ESPN and ESPN Deportes telecast began with a “Ceremonial 10-Count” in memory of “The Greatest” and continued to pay tribute to him throughout the telecast that was headlined by a light heavyweight bout between hard-hitting Russian Olympian Artur Beterbiev against Argentina’s Ezequiel Maderna.

The 31-year-old Beterbiev (10-0, 10 KOs), who fights out of Montreal, returned to the ring after an almost year-long layoff following shoulder surgery. Now seven months removed from the procedure, Beterbiev looked sharp from the opening bell as he threw straight right hands and body shots effectively to start the fight.

Maderna, who was also coming off of a long layoff, was hoping to make a statement in his first fight on North American soil as he moved up in weight for this bout. Beterbiev utilized his power and precision to control the entire fight, but kicked it into high gear in the third round, sending the 29-year-old Maderna to the canvas with two right hands. He stood up, but soon after was sent to the canvas again. This time, spitting out his mouth piece to delay the bout causing Referee Marlon B. Wright to deduct a point.

At the start of round four, Maderna was dropped with a punishing right hand. He rose to his feat only find himself canvas agan, looking at his corner, they threw in the towel and the fight was stopped at 54 seconds of round four.

”I am really satisfied by my performance,” said Beterbiev. “I want to thank my team for their patience during my inactivity.”

”My guy did really well after an absence of a year,” said Beterbiev’s trainer Marc Ramsay. “He is very special. In a short or medium period of time, we want to fight in a world championship.” 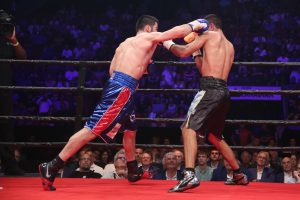 The PBC on ESPN telecast, which is the first of seven between June 4 and August 12, opened with two welterweight southpaws facing off in hopes of maintaining their undefeated records. However, it didn’t take long for Florida’s Bryant Perrella (14-0, 13 KOs) to prove he was the better man as he scored a second round TKO over Washington, D.C.’s David Grayton (14-1, 10 KOs).

Grayton was more active at the beginning of the fight, working his right hand on the inside. Perrella used his longer reach and height difference to his advantage as he did his best to dictate the pace. Perrella knocked Grayton down in the beginning of the second round and became forceful with the right hand as Grayton left himself open to punishment. Finally, Perrella threw a left that caused Grayton to stumble and referee David Griffin waved off the fight at 2:19.

“He came in real tough – a tough competitor,” said Perrella. “I was the best man tonight. I caught him with some really hard shots, dazed him. I took my time, I listened to what my team said and got him out of there.

“This is tremendous,” Perella continued. “This is what we’ve been wanting for a while to fight another undefeated prospect and get the recognition we feel we deserve. The welterweight division is filled with lions, tigers and bears, but I’m Tarzan baby. I’m the king of this jungle. I’m ready for whatever.”

Also featured on the telecast was a six-round super welterweight contest between prospect Jamontay Clark (10-0, 6 KOs) of Cincinnati and Mexican warrior Edgar Ortega (16-6, 10 KOs). The game Ortega shocked the six-foot-two Clark in the first round, sending him to the canvas with a hard right hand. Clark regained his composure in between the first and second, controlling the fight from then on. Despite taking the fight with nine days’ notice, Ortega stayed with Clark all six rounds, even rolling his ankle in the fourth. After the final bell rung, Clark remained undefeated, registering a unanimous decision victory with the judges scoring the bout 58-55 and 58-54 (twice).