Rosa (22-0, 10 KOs), rated No. 10 by the IBF and No. 12 by the WBC, was terribly disappointed by the stoppage decision, which was the result of a serious cut over Dominican Hinojosa’s right eye, ruled from an unintentional head butt.

In the opening round, Rosa dominated with powerful body punches, and it appeared to be only a matter of time before Hinojosa (28-9, 17 KOs) went to sleep.

“I felt that I dominated the fight and it was going to end sooner or later,” Rosa noted in his post-fight interview. “I hit him with a right hand (causing the cut) and I don’t agree with the decision (that it was from a head butt). He quit! I want to fight the best, whoever my promoter (Lou DiBella) chooses to put me in with next.” 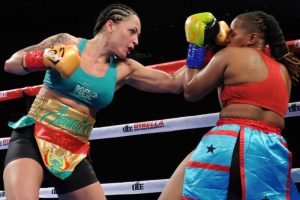 UBF super featherweight champion Jennifer “The Bolivian Queen” Salinas (19-3, 5 KOs), stopped Angel “Non-Stop” Gladney (9-12-1, 6 KOs) in the fourth round of their non-title fight. Salinas, who now fights out of Providence, defeated Gladney for the third time in three fights. She broke-down her opponent with her aggressive attack and Gladney finally wilted as referee Callas ended things in the fourth.

“She hurt me with two or three punches, Angel has got pop,” Salinas commented. “I’ve only been hit like that by Shelly (Salinas’ life partner 17-0 super bantamweight
Shelly Vincent. I’m surprised and grateful for all this support (Salinas has lived in Providence for only one year). It’s been a huge life change and I’m very happy where I’m at.”

When asked if she and Vincent would ever fight each other, both fighters agreed, possibly with the proceeds going to charity. “We could have a great fight because styles make fights,” Salinas added. “She can move down and I can move up. We have the same trainer (Peter Manfredo, Sr.), though, but I’d fight her. 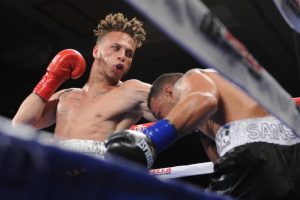 Teenage sensation “Marvelous” Mykey Williams (2-0, 2 KOs), fighting out of nearby East Hartford, showcased his vast skills on his way to a third-round stoppage of Puerto Rican junior middleweight Abdel Vera-Clemente (0-4). The 18-year-old Williams, a decorated amateur who won as 3-time Ringside World Champion, displayed quick hands and poise in the ring well beyond his years. He consistently ripped crisp combinations to Vera-Clemente’s body and head, hurting him with a right in the second. The onslaught continued as referee Johnny Callas stepped in to stop the action in the third round.

“This was a good experience,” Williams said after the fight. “I enjoyed showcasing my skills and look forward to doing it again. I’m confident in my skills and did all of the hard work in the gym. I think I put on a good show for the fans.”

Worcester, MA super lightweight Irvin Gonzalez (1-0, 1 KO) made the most of his brief pro debut, dropping Gilvan Santos (0-3) with a sharp left on the chin only a minute into the opening round. Santos beat the count but damage had already been done and referee Eddie Claudio wisely waved off the fight.