Josh Warrington hopes to be dragged into a war so he can prove he has power when he defends his WBC International Featherweight title against Patrick Hyland at the First Direct Arena in Leeds on July 30, live on Sky Sports.

Warrington puts his title on the line for the third time having been taken the distance in two challenging battles at his hometown fortress in his last two outings.

Warrington won every round against tough Australian Joel Brunker in his first defence in September before Hisashi Amagasa presented an entirely different challenge in April as the ‘Leeds Warrior’ brilliantly handled a significant height disadvantage against the six-foot Japanese star to record another wide decision win.

The 25 year old now faces Irish fans’ favourite Hyland, who is back in action having challenged WBC king Gary Russell Jr for the World title in April, and Warrington believes the challengers’ come-forward style will make for an entertaining clash where he can show the World champions he carries KO power. 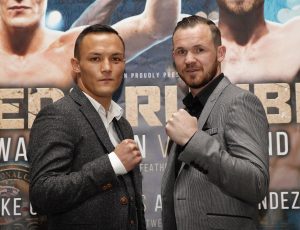 “Amagasa and Brunker were tough nights but we got the wins,” said Warrington. “Patrick has respect for me and I’ve got a lot of respect for him. He’s boxed for the World title earlier in the year so he’s been in with the very best and I know that this is a tough examination for me.

“I had to box clever in the last few fights, but I think this one will be toe-to-toe. Patrick doesn’t take a backwards step in his fights and I think that I’ll be able to show on July 30 that I can really dig and I think it’s going to be a great main event and one that I’ll shine in.

“This is a great show – it’s the best we’ve done so far in Leeds. The fans have put their hands in their pockets time and time again to come and see me and I think we’re delivering a brilliant card for them – the card oozes talent from top to bottom and it’s going to be a great night.”

Hyland is looking to bounce back from his second World title loss with a big win over Warrington, and he is excited to sample the raucous atmosphere that a night of top class boxing in Leeds offers.

“I’ve got a lot of fans coming over and the atmosphere is going to be electric,” said Hyland. “I’ve seen a lot of Josh’s fights and the noise is deafening so I can’t wait to be part of it.

“Gary Russell Jr is the best in the division. He is so, so fast and speed kills in this sport, but this is a different fight. I like how Josh fights and I’ve wanted to get in there with him to test him out and try to take that future World title shot that he’s looking at for myself. I think that we’ll end up standing toe-to-toe and giving the fans a real war.”

Warrington’s clash with Hyland tops a huge card in Leeds as Luke Campbell MBE faces his toughest test in the paid ranks to date in the shape of former World champion Argenis Mendez. 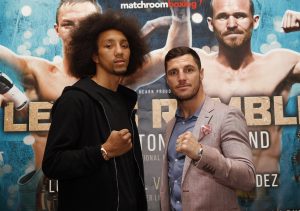 Tickets are on sale now priced at £30, £40, £60 and £100 available from the First Direct Arena at www.firstdirectarena.com and on 0844 248 1585. VIP tickets priced at £150 are available exclusively from Matchroom Boxing at www.matchroomboxing.com.

Tickets for July 30 are also available from http://www.stubhub.co.uk/matchroom-boxing-tickets/ – StubHub is the official ticket partner and marketplace of Matchroom Boxing.

RYAN BURNETT: We’re putting in a lot of work in the gym. I found out the other day that a World title shot is around the corner and that’s really exciting for me and something to build towards. Lee Haskins and Stuart Hall will clash for Lee’s belt soon and I’m happy to be named in with guys at that level so soon – but if you are being named in there you have to be ready to step up. My trainer Adam Booth says I’m ready to mix it with them so now it’s time to prove that.

JOSH WALE– The last time here I boxed well so I am looking forward to it. Our styles will gel – people have outboxed me in my losses but not out fought me. The odds are really wrong, this is a close fight, no-one puts me on the floor and I think that Gamal is a good prospect but we’ll see how good he is, I’m tried and tested and if he wants to come and have a fight that will play into my hands.

DILLIAN WHYTE: I was a bit happier with my performance against Ivica Bacurin when I watched it back. Cruiserweights are big enough to hold a punch and they look faster than Heavyweights. Dave Allen looks like he wants to fight me so let’s get it on – if he really wants it I’m happy to KO him in Leeds. I want to fight a big Heavyweight who will stand in the pocket and trade with me so I can KO someone – the Leeds fans love a KO so they will love me if we can find a guy willing to have a proper fight. We’re British fighters so we want to fight around the country not just London, so I’m really excited about the 30th.

TOMMY COYLE: It’s every young fighters dream to fight for the Lonsdale belt – I didn’t expect to come this far in my career, so to get the chance to win the British title and be the first man from Hull to do so is a dream come true. I’ve got my work cut out; Tyrone’s a cute and talented fighter but I am confident that I can pull the win off. The weight is a big thing for me, we boxed as amateurs ten years ago and I was the same weight as I was as a Lightweight, so the five pounds is big for me. A leopard can’t change its spots, I’m going to go in there and enjoy it and drag him into my fight.

My younger brother has been at Leeds United since he was 6 and is now in the first team, so it’s got a special place in my heart.

There’s no big fight after this one to build towards, this is the one – no carrot, just beat Tyrone – and I think that my desire will be enough to get it done.

Tyrone Nurse: I’ve gone from being the boring boxer to being the young guy in good fights. I love that Lonsdale belt and I don’t want to let it go, we boxed years ago and it’s time to do it again. I know what he brings on the night but it won’t be enough and the World title fight with Ricky Burns is out there for me.

I get told off for getting involved in fights, but I feel I am getting bigger and stronger and I do enjoy getting into proper wars