The hard-fought battle between Kovalev and Chilemba was non-stop action from bell to bell. Kovalev came out of the gates guns blazing but the tough Chilemba took every punch handed out by the hard-hitting champ. The toughest round for the 29-year old Chilemba was the 7th when he was knocked down by the Krusher. Chilemba managed to recover and last the remainder of the fight. Isaac is only the second fighter to go the full 12 championship rounds with Kovalev (Bernard Hopkins was the first, Nov. 8, 2014, which Kovalev won by UD). However, it was not enough to secure the victory against the more powerful Kovalev. The judges handed the victory to Kovalev (117-110, 116-111, 118-109). 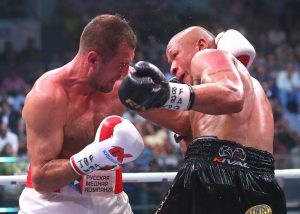 The challenger said, “I want to thank Kovalev and his team. I came here to fight. As I said before I have been short a couple times at my world title shot. Tonight I had three titles in the palm of my hand and I came here to give all I can. I believe I did give it my all and unfortunately I came up short. I am proud of my performance tonight even though I didn’t get a victory tonight and I thank God for that. I am a fighter. I was born a fighter. I was born a warrior. I always fight. I always get going and I won’t back down. I will be back soon in the ring. I believe my promoter and my team will give me that. I will be back soon.”

And still the WBO, WBA and IBF Light Heavyweight Champion, Sergey Kovalev said, “My promoter and manager chose a fighter that is similar to Andre Ward’s style, so that I will be prepared for the fight with Ward. When they told me that my opponent will be Chilemba because his style is similar to Andre Ward’s style, I was thinking to myself what’s so similar to his style? Their height is different, so at first I didn’t see much, but after the fight I realize that, in fact, he does have similar style to Andre Ward’s: waiting out and counter-attacks, he is not going in much, he waits in defense and waits for the right moment.” 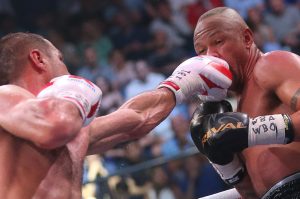 On his preparation for the fight, Kovalev continued, “There were obviously some moments during the training with regards to my health, because I got a cold and I didn’t say anything, so the information wouldn’t get to Chilemba, that it might work against me. So myself and my trainer worked hard to overcome this stage and prepared for the fight.”

On the knockdown in round seven, “If it wasn’t the end of the round I would have pursued to actively attack him. But because the bell rang, we rested and he managed to pull himself together and I didn’t want to waste my energy. He is very experienced and had as many fights as myself and with boxers of highest level, therefore I was boxing and continue boxing and whatever happens, then it happens. There was no aim to knockout him, but the main aim was to gain experience from this fight for the next fight in November in Las Vegas.”

On fighting in front of his hometown crowd for the first time as a champion, “When I box as a visitor, there are much less fans that support me, there is more support for the opponents and I love to disappoint my opponents’ fans, which is sort of a motivation.”

On whether he was injured during the fight, “In general there are no major injuries. I have a little bruise on my eye, I don’t know how. No major punches I didn’t feel, there was a head bump, that could possibly damage, but there are no other injuries, which is the most important thing. There were mistakes during the camp, you can’t do everything perfect. And when you meet these difficulties you gain experience. What doesn’t break us makes us stronger.”

On experience gained in the fight, “I gained experience; there are things that I have to work with now. I have to work with opponents that sit in the defense and I have to work more with my left arm. And probably I also wanted to make a hard punch and that worked against me. My arms felt heavy and not everything that I wanted happened, and that is again because it’s Chilemba. He is actually a very experienced fighter and like many “couch-experts” said: what round? I never think about when knockout is going to be – it’s boxing, you need just one punch. We are all under God and how he judges, that’s how it’s going to be. I believe my mistake was that I was trying to put power in every punch. I had a heavy feeling in my hands. That’s why he was faster than me in some moments. ”

On how Ward and Chilemba compare, “Andre Ward’s got different timing, he’s faster with his legs. He’s not only good in defense but also he can attack. He has some defensive tricks. If saying in an advanced way, his defense is more modernized. He can feel his competitor better, he’s got better reaction. He also has good experience. After all, he is an Olympic champion. The last American [male] champion at the Olympics. Moreover, he is undefeated. This adds a kind of psychological pressure. He is the best in all the categories. But talking of power he is not a crusher. We have 2 different styles. So that is the difference between them. They are counterpunchers.”

Main Events’ CEO, Kathy Duva, CEO added, “The toughest fight is always the one right before the big one and for a road-warrior like Sergey the toughest fight is the one at home. Tonight Sergey had both tonight. On top of that Isaac Chilemba fought the fight of his career tonight. Isaac deserves all the credit in the world for going 12 rounds with the Krusher. This is the type of tough fight Sergey needed to prepare for Andre Ward. Like the great champion he is, Sergey overcame all these obstacles and won.”

Also appearing on the card was Main Events’ super welterweight prospect Madiyar Ashkeyev (4-0, 3 KOs) of Kazakhstan who scored a second round knockout over Ismat Eynullayev (7-1, 4 KOs) of Azerbaijan.

*Note: All records have been updated to reflect results.