Also in attendance at Wednesday’s event were undefeated lightweights Robert Easter and Richard Commey, who fight for a vacant world title Friday night on Spike. Televised coverage begins at 9 p.m. ET/8 p.m. CT and features local contender Travis “My Time” Kauffman in a 10-round heavyweight bout.

Tickets for the live event, which is promoted by King’s Promotions, start at $20 and are on sale now via Ticketmaster.

Here is what the fighters had to say Wednesday:

“It’s an honor to be up here as the main event with these young fighters and future champions. I’m excited to be back in the ring. It’s been too long but I’ve been training hard and I feel great.

“I’m going to do what I do best. People talk about my power, but I get my skills from the amateur system and from proving that I have the goods. I have the power in addition to the skill set. I’m planning on proving that Friday night.

“I’ll be ready every round to give it my best and he better come in ready to fight. I’m excited to be here and display my skills in a new place.

“The fans are looking forward to a good fight so I hope Sergio is ready to make this an exciting battle. I’m going to show everybody my full arsenal.”

“Our last fight was on the way to being a ‘Fight of the Year,’ but I busted my ankle in the second round and I couldn’t continue. I’ve been waiting 13 months for this opportunity and I’m completely ready. This has been a fantastic training camp.

“It’s time for business. People don’t know what’s going to happen. He has big power and I have a lot of experience and tricks up my sleeve. The later the fight goes, the better off for me. 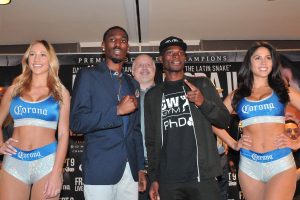 “This is a big opportunity and something I’ve wanted for my whole life. Ever since I was nine-years-old. All the hard work I’ve put in since I was a kid, everyone will see. I will put on a great performance

“We already were working hard before we knew we had this title shot. Someone has to pay for the work I’ve been putting in for 16 years in this business. On Friday night it will be another victory and another man down.”

“I’m very happy to be here and I’m thankful for this opportunity. When I first started boxing this is what I hoped for.

“This is all that I have had on my mind. This is what has motivated me for many years.