Kell Brook lost his unbeaten record at the 02 arena on Saturday night when he was stopped by Gennady Golovkin inside five rounds. The fight was for Golovkin’s WBC, IBF and IBO middleweight titles.

Brook made a good start, outspeeding the champion and landing combinations, but the shots that Golovkin was landing were already reddening the challenger’s face. Brook used lateral movement in an attempt to befuddle his opponent but did often find himself against the ropes, however, he was able to keep moving away for the time being.

Brook’s eye was swelling in the third although he was still having reasonable success, but he did look distressed by the time the bell rang. The jab became the choice of weapon for the Englishman in the 4th, although it was clear to see that his workrate was severely dropping by this point.

It all came crashing down in the 5th when Golovkin began teeing off on him, although a defiant Brook shrugged his shoulders at him. More hurtful combinations bloodied Brook’s face and trainer, Dominic Ingle stepped up to wave the towel to signal to the referee to stop the fight, a wish that was granted.

While the outcome wasn’t really unexpected, it is a possibility that Kell Brook laid out the blueprint for future Golovkin opponents on how to tackle him. Lateral movement, fighting on the backfoot and the jab were all key in Brook having some success early on. His lack of natural strength at the middleweight class was probably the main factor in not being able to put a dent in the Kazakhstan fighter. But anybody who is a natural middleweight with good reflexes and who is athletic would give the man, known as ‘GGG,’ huge problems.

Brook can go home with his head held high and keep building his legacy, possibly dropping back down to welterweight or maybe at light-middleweight where huge fights with the likes of Saul Alvarez could await.

Lee Haskins had a tough night against Stuart Hall when he defended his IBF super-bantamweight title. 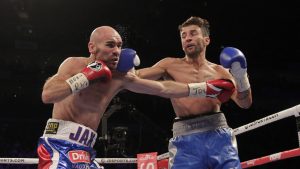 He came away with a unanimous decision by scores of 115-113, 117-111 and 116-112 but it looked as if Hall’s more solid and cleaner punching was what should have won the contest. Hall stalked the champion throughout, picking his shots carefully, while Haskins landed punches that had little effect. The champion’s lack of defense saw his head rocked back several times by eye catching jabs and straight right hands and this pattern continued until the final bell.

To the disarray of many, Lee Haskins managed to retain his title. It is not the first time that an unexpected decision has been read out and this probably will not be the last in this weird and wonderful sport we call boxing.