Wladimir Klitschko had to go it alone at Monday’s London press conference to promote his rematch with current heavyweight champion, Tyson Fury. The fight will be staged on October 29th in Manchester.

Promoter Frank Warren disclosed that the fight will be available to SKY subscribers for an additional fee but will remain free for current Boxnation members.

Tyson Fury never made an appearance due to claims that his car had broken down on the way to the Landmark hotel where the two fighters were supposed to come face to face, however, Peter Fury was present to address questions and concerns. 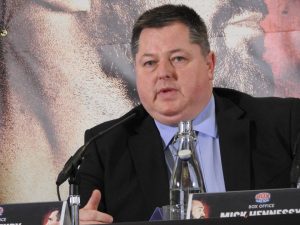 The contest has already been called off once before when Fury damaged his ankle but Frank Warren is adamant that nothing will stop the bout from now rolling forward.

“There is no way this fight does not happen unless, god forbid, one of them gets an injury,” he said. “If Tyson’s car breaks down again on the way to the arena, I’ll pick him up on my motorbike,” said Warren.

Wladmir Klitschko seemed confident of victory in October and welcomed all kinds of questions from the media with a heavy degree of warmth. 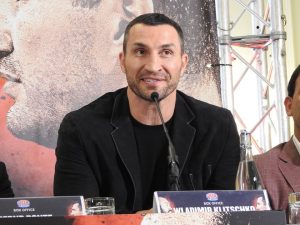 When asked what Klitschko thought of Fury’s non appearance, the Ukrainian said, “It really doesn’t matter. If he didn’t (turn up), so what? I’ve had this in the past with (Alexander) Povetkin when we were supposed to fight and also with (David) Haye. It’s nothing new,” Klitschko said.

“I’m not surprised any more because in the the past there have been so many ridiculous moves from the Fury camp.

“It can go in any direction but I’m highly motivated and it didn’t take any air out of me. I know what kind of people we’re dealing with. There’s nothing that is going to make me less focused or train less. I know this fight is going to happen and I know I’m going to win.

“When the fight was postponed (from July), I was in camp in Austria. In a way it was deja vu because I had it with Haye.

“I do feel better (for the rest). I felt good the entire time, but even if now I’m starting another camp and preparing for Fury, I have a different look, I’m a totally different person. I definitely feel better about it. I had my fun time, my family time, so I’m well-balanced in this way.

Klitschko gave his thoughts on whether he thought about retiring when he lost last year.

“There was never a thought about retiring. I was suffering with thoughts like ‘Wait a second, that must be a dream’. I actually woke up and was like ‘This is not for real’, because that’s not what I get used to.

“It took me two days to shake it off. By Tuesday, I said ‘I’m going to execute the option in our contract, for a rematch’. By Wednesday we announced it. The first days, I just needed to understand what happened.

“It has been difficult getting up each day and not being champion. I have the old hunger back and feel more motivated than ever.”

Peter Fury stated, “It’s been a long and difficult few months,” claimed Fury. “At times it has seemed like Tyson has been hunted, condemned like a guilty man without a trial – my job now is to make him think differently and get him right for this fight. These are the best two heavyweights in the world and this is the real heavyweight championship. It’s a 50-50 fight with so much at stake.”