Tares “The Real Deal Shelestyuk maintained an unbeaten record and continued his ascent in the welterweight division with a close, unanimous 10-round decision over his toughest opponent to date, Jimmy “The Truth” Herrera in Friday’s main event of a ShoBox: The New Generation tripleheader live on SHOWTIME from the outdoor Omega Products Event Center in Corona, Calif.

In a rough and tumble, bloody collision of undefeated cruiserweights in the co-feature, southpaw Constantin Bejenaru (12-0, 4 KOs, 0-1-1 in World Series of Boxing), of Catskill, N.Y. by way of Moldova, survived a knockdown and several unintentional head butts to register a unanimous 10-round decision over Steve Bujaj (16-1-1, 11 KOs), of New York.

Southpaw Shelestyuk, who entered the ring ranked No. 9 in the WBO and No. 13 in the WBA, turned back a determined bid by Herrera to win despite getting docked a point for excessive holding in the fifth round.

“It was a tough fight,’’ Shelestyuk. “He is a tough fighter, he is slow but he worked well. In the first round, I did well but my legs went on me. I think it was because I did not sleep well.

“After five rounds I started to find my rhythm. I started boxing him. I made some mistakes in there like pulling straight back. This fight will make me better. Like I said, he was tough but nothing special. When my legs went, I started to work inside. I beat him good in the last round and if there was 30 seconds more, I could have stopped him.

“I am looking forward to being more active in 2017. I will take two or three weeks off and be right back in the gym.’’

“The Truth” hurts and Herrera had more than his fair share of moments in a tight fight. Herrera, a pro since December 2009, figured to be a legitimate test for Shelestyuk and he was. But Taras was more active (landing 169 of 689 punches, compared to Herrera’s 130 of 460). Each connected 28 percent of the time.

Herrera, who had defeated undefeated prospects in four of previous nine fights, was not happy with the verdict. “It was a good fight. There is not much that I can say. I thought it was closer than the scores indicated. I had fun in there and I give him credit. He was everything I expected. He is a smart fighter.’’

“I would live to be a test dummy for all these young prospects. I thought it could have been a draw, but the people who saw it on TV can have their opinion.’’

Making his second ShoBox start, Bejenaru triumphed by the scores of 97-91 on the three judges’ scorecards. The lefthander went down from a clean, counter left hook to the chin in the fifth and got the worse of the unintentional head butts but appeared to outhustle and outfight a reluctant Bujaj most of the way. 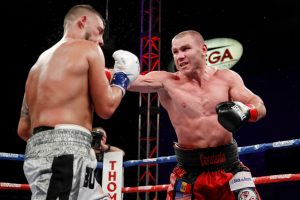 A short cruiserweight with an awkward, herky-jerky style Bejenaru pressed the issue throughout and was much more active, throwing more than 100 more punches than Bujaj (454-336) and averaged 45 punches thrown per round compared to 38 for Bujaj.

“He’s a dirty fighter,’’ said Bejenaru after a match in which he suffered a bad cut over his left eye and a big welt on his overhead. “You look at all his fights, all he does is lead with his head. I was affected by his head butts but there was no way I was going to stop. He complains a lot, but all he did was foul. It felt to me like he bit me on the left ear after… that’s how he fights.

“The sport is boxing, not swimming and he flails his punches like a swimmer, a street fighter, not a pro fighter. He caught me with a clean shot on the knockdown but I got right up and wasn’t hurt.

“This win is a big step in my career. It will help me continue to rise me up in the rankings on my way to a title shot.’’

Bujaj, who was making his ShoBox debut, was livid afterward.

“Hell, yeah, I’m mad,” he said. “The scoring was bad. I knew what I was getting into by fighting in his backyard, but I definitely thought I won. I knocked him down. He never hurt me.”

The aggressive-minded Mendez came out patiently and allowed Freitas to throw the majority of the early punches. Mendez’ first meaningful punch of the fight was a paralyzing left hook to the body that put Freitas down and writhing in pain. 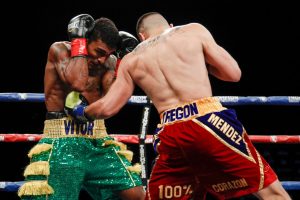 “I was surprised he didn’t take that body shot well, said Mendez, is who is trained by Joel Diaz. “I knew I hurt him, but I thought he’d get up. I saw that he wasn’t covering up very well so I knew I was going to land one eventually.”

“I was surprisingly nervous going into this fight. I was somewhat timid to start. I usually come out stronger, but it didn’t matter because we got the result that we wanted.”

“I’m pumped for the knockout win. I know it didn’t last long, but I hope the TV audience enjoyed it.”

Freitas controlled most of the round with his movement and sharper punching, but a savage hook to the body — his third connect to the body — left the Brazilian on the canvas long after the 10 count.

“I messed up,’’ a tearful Jones Freitas said. “I paused at the wrong time and he hit me with the right punch. This means nothing to me. I’m going to keep working hard and training hard. I want a rematch.”

Manuel Avila edges past Jose Ramirez
10 Of The Best Pay Per View Events To Have Been Screened In The UK
Read more articles about: Vitor Jones Freitas