Muhammad Ali once said to renowned trainer Angelo Dundee that he wanted to bring boxing back to the forefront after the sport had died down a little since the departure of the likes of Sugar Ray Robinson and Rocky Marciano as he was working his way up the rankings. We know how the sport of boxing panned out for the next 15 or so years with the famous heavyweight in it. 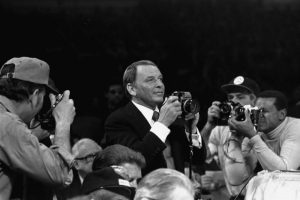 Dundee went on to train 1980’s boxing legend Sugar Ray Leonard, who coincidentally had the same flamboyant style as his bigger counterpart. As did Ali, the former Olympic Gold Medalist went on to face the best of the division including the likes of Thomas Hearns and Roberto Duran. Ali, of course, shocked the world with high profile fights and wins over Sonny Liston and George Foreman.

The 1990’s showcased some great world champion boxers but it lacked the variety of rivalries and glamour that the sport had seen in earlier decades. Lennox Lewis largely dominated the heavyweight division throughout then but received criticism that he was “boring” for the public. Retirement has since been more kind to him. Nigel Benn and Chris Eubank’s rivalry was within the confines of the domestic scene. 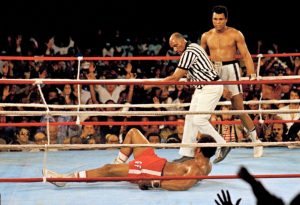 Muhammad Ali shocked the world for the second time when he stopped the intimidating George Foreman.

Before the 70’s, boxing was largely dominated by one particular fighter that did not have to share the limelight, namely Joe Louis and Jack Johnson. But even in the 70’s and 80’s boxing did not start damaging itself with too many organisations that want to shove their belts in the faces of the combatants, trying to convince them that the astronomical sanctioning fees are worth paying for. Pay Per View didn’t rear it’s head until 1981 when it charged fans to watch Leonard v Hearns I, but even that was reserved for fights that were considered the most special. 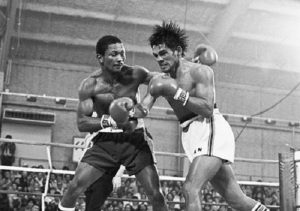 So, when one thinks of which was the best decade for boxing, it is difficult to dispute that either the 1970’s or the 1980’s are the hallmark decades. But out of the two, which was the most superior?

Sugar Ray Leonard was the poster boy for boxing during the “golden decade” and with the exception of Mike Tyson, most of the attention was focused on the welterweight and middleweight classes. Tyson is now known as one of the most famous names ever in heavyweight history, but the only entertaining factor about him was that he was knocking out opponents that were simply a class or two below him. He excited people with bone crunching knockouts of fighters that were often intimidated before they entered the ring! 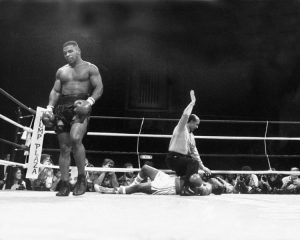 Mike Tyson crushed everybody in his path during the 1980’s, but failed to gain a memorable nemesis.

Tyson never really gained a memorable rival with the exception of Evander Holyfield in the mid 1990’s. A trick was missed when Tyson v Buster Douglas II failed to materialise.

Larry Holmes and former undisputed light-heavyweight champion Michael Spinks failed to gain much recognition for their careers and Aaron Pryor was largely overshadowed by ‘Sugar.’ Those are a few of the negatives of the decade that was largely occupied by boxers that were, for once, not heavyweights. But it does get credit for the rise of one of the best Mexican fighters in Julio Cesar Chavez.

Regarding the 1970’s, ‘The Greatest,’ who does not need much of a description, was the face of boxing. Many would say he still is! Joe Frazier, Ken Norton and George Foreman all gave fans something to feel gratified for, too. Roberto Duran also campaigned during the 1970’s although, as was Pryor, had some of the thunder stolen from him by the ‘Ali magic.’ Carlos Zarate and Wilfredo Gomez were all respected by the most devoted followers. 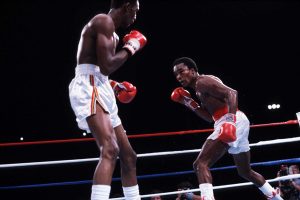 When one wants to analyse and attempt to come to a conclusion as to which decade fared better, the quality of the fights and the popularity of boxing in those eras are probably the most telling, and maybe not the fighters themselves. The Fight of the Century of 1971, The Rumble in the Jungle and The Thrilla in Manila all made the world stop. And of course, not only is Muhammad Ali now remembered for being one of the greatest heavyweight boxers ever, but the most famous sporting icon!

The 1980’s saw the most thrilling 3 round fight when Marvin Hagler and Thomas Hearns threw boxing out of the window for nearly 9 minutes. Leonard v Hearns I was arguably even better due to it containing skill as well as will! But the likes of Hearns v Duran, Hagler v Duran and even Leonard v Hagler are all remembered for reasons other than when the punches were thrown and landed. For those that delved deeper, Salvador Sanchez faced Azumah Nelson, Aaron Pryor and Alexis Arguello shared two great battles and Evander Holyfield went to war with Dwight Muhammad Qawi to become the first man to unify the cruiserweight division. 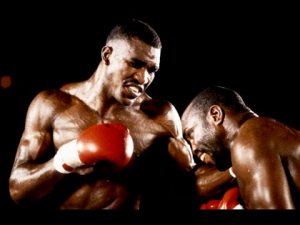 Evander Holyfield became the first man to unify the cruiserweight division with his epic win over Dwight Muhammad Qawi.

But the edge would probably have to go to the 1970’s due to people’s fascination with the heavyweight division. The masses have always wanted knockouts and the heavyweights can deliver that with just one punch. Ali could not really deliver on that promise but he had a natural talent for the ‘gift of the gab’ as well as backing it up when he shocked the world on more than one occasion. In an era with no pay per view, boxing’s biggest clashes were viewed throughout the world with no financial catch.

It is looked back upon as a time when the ordinary Joe would say, “Those were the days.”

Jermell Charlo promises to be at his best against Jeison…

Junior middleweight contender Erickson ‘Hammer’ Lubin 22-1 (16) knows that he needs a convincing victory over Terrell Gausha 21-1-1 (10) to stake his claim for another world title shot. The pair will meet over 12 rounds at the Mohegan Sun Casino i…