“Sean Murphy was one of the head trainers down at Finchley ABC. When he took Joshua on the pads, he didn’t just break his hand, he smashed it. Sean is still suffering from that injury today.

“I have special pads with balls inside of them which took the shock away. Sean didn’t on that particular occasion.

“Joshua smashed him. All the metacarpal bones and everything else and he still suffers from it.

”Which is why we shared the pads and that type of thing – we shared the training. All the different trainers helped out that way. I’m retired now. It’s quite entertaining how we shared around all the boxers. It was good, it was quite good – I enjoyed myself there.” 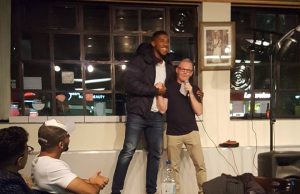 Boxing talent and knowledge is very important for a young boxer if they are to grow as a fighter. Joshua showed an eagerness to learn:

“He trained with Wladimir Klitschko and when he came back I met up with him and said “who arranged that?”

“I was thinking it was going to be Matchroom, he said. “I phoned him up myself. I phoned Klitschko’s camp and said can I go out training?” And that’s what he done. That was 2 years ago now, I think.

“He just wanted to see what it was like to train with Klitschko. Klitschko’s statement that came out was Joshua was the future of boxing. It wasn’t any ploy or anything like that. They know at some stage it’s going to come right for him. It will come right for him, without a shadow of doubt.”