At 21-years-old, Cardiffian Jamie JJ Evans has impressively won all five of his professional contests. He turned professional in 2016 and since then has defeated tough journeymen like William Warburton and Kevin McCauley. The southpaw is trained by Darren Wilson, who helped get Nathan Cleverly back to World Champion status.

First Choice Fitness in Pontyclun, South Wales, is where Wilson trains the young prospect. I caught up with JJ for an interview.

How did you get into boxing?

When I first got into boxing, it was my uncle who first took me to the gym. I was about 8-years-old. At Splott ABC, all my cousins went and I followed them in. I’ve never looked back since.

Who were your favourite fighters?

Joe Calzaghe is my favourite. At the moment, I like James DeGale and Billy Joe Saunders.

What was your amateur experience?

I had really good amateur experience. All together I have 55 fights, only lost 7 of them, so won 48. I won the British three times, the Welsh ten times. I boxed in the World Championships and Europeans. Fought in tournaments all over.

Why did you decide to turn professional?

I just never really got on with the amateurs, didn’t really like it.I feel professional suits me a lot more. I like to take my time and pick my shots. Basically, I thought it would suit me a lot better.

Are you a full-time fighter?

No, I’m also a gardener. I work with my father doing gardening.

The week up to the fight, everything’s done, all the hard work done. Just chilling out waiting for the fight?

Least favourite part of the fight?

The beginning of camp (laughs)

How would you describe your fighting style? 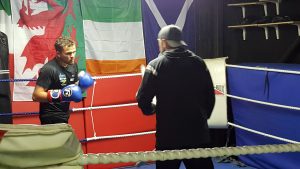 Made your debut in Weston-super-Mare, against Nathan Hardy. How did you feel going into the fight? Nerves?

What is your best performance?

They’ve all been similar. I think the better the opponent, the better I’ll be. So you haven’t seen the best of me yet.

What has been your toughest fight?

The last two have been tough fights. I’d say the William Warburton was a little bit tougher.

What’s it been like having your fights shown on S4C (Welsh freeview channel)?

It’s been really good exposure. Really good, I like it. The shows looked really good. Puts Welsh Boxing right up there.

How many fights would you like to have this year?

I’d like to get up to eight or nine fights this year. I’d be happy with that.

When are you boxing next?

End of June or July time maybe. In Wales, a Sanigar show probably.

What are your ambitions in the sport?

I’d love to be a British champion.

Anybody you’d like to call out for the Welsh title?

I’d love a Welsh title fight. Anyone, I don’t care. Whether at welter or super-welter. Whoever they’re just line them up.