In the “Locked n’ Loaded” main event, welterweight Taras “Real Deal” Shelestyuk (16-0, 10 KOs) made quick work of Jesus Alvarez Rodriguez (15-3, 11 KOs) by knocking him out in the third round Saturday night from Omega Products International in Sacramento, Calif.

Shelestyuk, who is ranked No. 5 by the WBO, predicted a knockout win in his prefight interview with the Olympic bronze medalist (London 2012) saying he planned to be aggressive from the start.

“I didn’t want this fight going the distance,” said Shelestyuk, who attributes the aggressiveness to new trainer Joel Diaz. “Joel and I worked on increasing our punch output and it showed in this fight.”

Shelestyuk, who is from the Ukraine but now makes his home in Los Angeles, rocked Rodriguez in the first round. He connected on a two-punch combination that sent the Mexican to the canvas. In the third round, Shelestyuk struck early and often, earning the knockout win at the 2:05 mark.

Top featherweight prospect Ruben Villa (7-0, 4 KOs) of Salinas, Calif. delivered a beating to overmatched veteran Jonathan Alcantara (7-16-2, 1 KO) of El Salvador. Villa, who swept all three scorecards (40-36), looked equally comfortable fighting on the outside or in the pocket.

“I think this fight showed how versatile I am,” Villa said. “I boxed him well and mixed it up inside without taking any hits. It was a solid performance.”

Villa, indeed, looked the part of an elite prospect. He was aggressive the entire fight, yet was extremely disciplined on the defensive end.

“There’s no doubt I frustrated him,” Villa continued. “I could tell he was having a hard time. I never let him relax.”

Shelestyuk and Villa are co-promoted by Banner Promotions and Thompson Boxing. 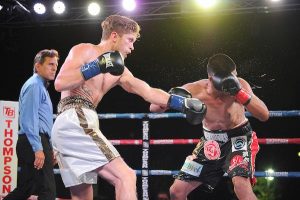 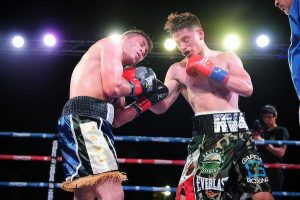 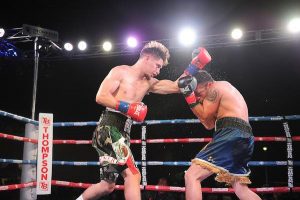 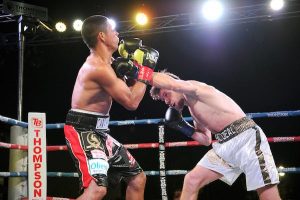