“I can’t wait for the fight,” said Smith.

The Liverpool fighter will be fighting for the seventh time at the Echo Arena.

“I have always been able to perform well at the Echo Arena, and I can promise my fans another great fight tomorrow. I always try to improve and tomorrow I will show how much I have improved since my last fight.”

“I haven’t regretted picking Skoglund. Stylistically he will bring out the best in my style and things people haven’t seen from me before.”

The Swede, however, looked just as confident as his opponent, one the favorites to take home the Ali Trophy next year in May.

“I feel very good,” said Skoglund. “I believe in myself and the people of Sweden believe me, I will do anything to make them proud. Maybe my countrymen are the only people who believe in me, so I am happy for their support!”

“It is great to be in Liverpool, the second stop of the tournament. The World Boxing Super Series is a very exciting concept and I think it is great for boxing to see some of the best in the world fight each other, and that is what we are going to see on Saturday,” said Lennon Jr.

Tickets for the Smith-Skoglund Muhammad Ali Trophy quarter-final and WBC Diamond World title contest on Saturday, September 16 at the Echo Arena in Liverpool are available from £35 at EchoArena.com 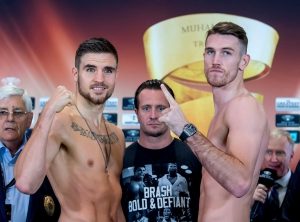