Repeat or Revenge? Kash Farooq and Scott Allan will meet once again at the St Andrew’s Sporting Club on November 23. The pair will once again clash at the Raddison Blu Hotel in Glasgow with the Scottish Bantamweight title and the right to fight for the British title are both at stake.

The previous time the pair met saw Farooq edge out Allan in an exciting 8 round contest for the British Challenge Bantamweight title at the St Andrew’s Sporting Club. Both fighters have unquestionably improved since their last meeting and will likely provide an even higher quality contest at the exquisite Glasgow venue.

Both fighters have their sights set on a showdown with current British Champion Josh Wale, however, both men state that they are not overlooking one another. A spokesperson for the St Andrew’s Sporting Club weighed in on the exciting clash between Farooq and Allan.

They stated, “We are all really looking forward to the clash between Kash Farooq and Scott Allan at the St Andrew’s Sporting Club. The last fight was an excellent domestic dust-up and we expect this contest to be even better, with the winner being in line to challenge for the British title.”

Dundee Bantamweight Jamie Wilson who recently challenged Wale for the British title will appear on the undercard, and will possibly be eyeing up a rematch with Wale or a possible showdown with the winner of Farooq and Allan. The Bantamweight division is buzzing in Scotland and Britain at the moment and Wilson will be looking to impress as he aims to stake his claim amongst the top names domestically.

Paisley’s highly rated Super Lightweight Callen McAuley will also feature on the bill. McAuley looked solid on his professional debut as he picked up a points victory against a very game opponent. McAuley will look to impress again on November 23 in Glasgow.
A St Andrew’s Sporting Club Spokesperson gave their assessment on the undercard.
They stated, “Many thought Jamie Wilson was unlucky not to be crowned British Champion against Josh Wale. We’re delighted to have Jamie boxing at the St Andrew’s Sporting Club and we will be looking to push Jamie into title contests in the near future.”

They continued, “Callen McAuley has made a good start to his professional career and will look to continue his progression on November 23. He is an unquestioned talent who we are all excited about.”

Tickets and Memberships are available for the November 23 St Andrew’s Sporting Club meeting by emailing office@standrewssportingclub.com or calling 0141 810 5700 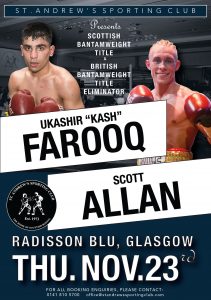