The 6′ 2”, 280-pound Brazilian, now fighting out of Worcester (MA), fought another pro-debut boxer with limited MMA experience, Alejandro Esquilin Santiago, of Tampa (FL). Gonzaga stalked the southpaw Santiago, landing some hard shots in the opening round. The heavy-handed Gonzaga picked up the pace in the third and his upset-minded opponent responded in a positive fashion. Both fighters exchanged freely in the fourth and final round, neither was hurt during the contest, and Gonzaga was awarded a win by four-round majority decision.

“I thought I’d be more relaxed in the ring like I had been in the gym,” Gonzaga said. “I did my best and came away with a victory. I was too safe in the third round. My punches were much strong and a lot of his punches I blocked with my gloves. This was really great! tonight”

“I felt good and gave it my all,” Santiago remarked. “He hit me with some shots and gave ’em back. Not only does he have a big nose (“Napao”), he has a strong, big head, too.”

Rivera, not relations to the promoter, first dropped Castillo with a beautifully placed left uppercut and finished the show moments later with a left hook that sent Castillo flying to canvas. Referee Kevin Hope didn’t bother to count.

“My coaches were telling me to be calm because it was a six-round bout,” Rivera explained. “I saw that he had his left down and caught him with an uppercut. I’m strong to the finish because I eat my spinach.”

Danbury (CT) junior welterweight Omar Bordoy, Jr. (3-0, 1 KO) stopped New York veteran Bryan “The Brick” Abraham (6-31, 6 KOs) in the fourth and final round. Abraham was decked twice and after counting to 10 after Abraham’s second time on the canvas, referee Paul Casey waved off the action. 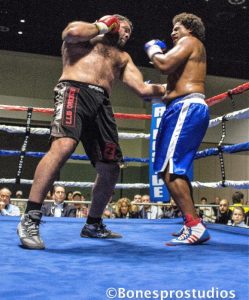