Sergey “Krusher” Kovalev regained his WBO Light Heavyweight World Title in classic Krusher fashion with a second round stoppage of Vyacheslav Shabranskyy at the Theater at Madison Square Garden and live on HBO World Championship Boxing. Kovalev came out of the gates swinging, knocking down Shabranskyy twice in the first round. The second round continued with more hard shots from The Krusher and a third knockdown. Finally, at 2:36 of the second round, the referee called a halt to the action and Kovalev was named the new WBO champ.

After the fight Kovalev said, “I did it and worked very hard to get to champion status. My brain, mentally, my conditioning, my body – I’m back. It’s my goal to be the best in this division. I am here, I love boxing, I love to make great fights. This makes boxing interesting. We can make good fights for boxing fans, and make boxing history. Let’s find out who is the best. Chickenson is on my list.This is very good for boxing. Let’s do it.”

The co-feature of the evening started off with a bang as both Sullivan Barrera (21-1, 14 KOs) of Guantanamo Bay, Cuba and Felix Valera (162, 13 KOs) of Santo Domingo, Dominican Republic scored knockdowns in the first round.

In the second round, Valera began to taunt Sullivan with his antics but Barrera countered with hard shots that put a quick end to the showboating. However, Barrera suffered a cut over his left eye that started to swell in the second round. Shortly after the bell rang to start the third round, Valera hit Barrera with a low blow that cost him a point on the judges’ scorecards.

Both fighters continued to trade hard shots over the next few rounds. In the sixth, the action continued to intensify and referee Mike Ortega deducted another point from Valera for hitting Sullivan with the second low-blow of the night. The low blows continued in the eighth and the referee took another point away from Valera. However, at the start of the ninth round, it was Barrera who lost a point for a low blow. This exciting grudge match continued into the tenth and final round with both competitors trading big shots. At the end of ten exciting rounds, the judges all scored the bout in favor of Barrera (98-88, 97-90 and 97-89).

“It was a tough, awkward fight,” explained Barrera. “I have beaten two of the three light heavyweights shown on HBO. I’m just waiting to finally get the opportunity I deserve.”

The live HBO telecast began with a controversial decision between Yuriorkis Gamboa (28-2, 17 KOs) of Miami, Florida and Jason Sosa (20-3-4, 15 KOs) of Camden, New Jersey. Despite a deducted point for holding in the tenth, Gamboa was declared the winner by majority decision after ten hard-fought rounds. The scorecards varied widely for this bout. One referee scored the contest 94-94. The other two judges scored the fight for Gamboa 95-93 and 96-92.

In the ring following the fight the two fighters had this exchange:

Gamboa: “I’m sorry I didn’t give you a better match. I only had 3 weeks to prepare.”
Sosa: “That’s boxing”
Gamboa: “You gave a great fight. You have a great heart.”
Sosa: “I was a fun fight. I took some breaks but I thought I did enough to win. I know I did enough to win the fight. I didn’t get hurt at all during the fight. I spar with middleweights so that was nothing.”
Gamboa: “It was a good fight. I didn’t have enough time to train. I only had three weeks. I didn’t have time to get ready. I needed 2 or 3 more weeks to lose the weight correctly. Of course the decision was good. I think I won every round. Except for the knockdown and the point deduction.”

After the fight Murtazaliev said, “The fight went as it went. I didn’t think my opponent would be in the ring that long. He has a big heart. All respect to him.”

When asked about fighting at Madison Square Garden he added, “It looked like what I dreamed all my life. I’m not that famous a boxer, but I want to say thank you to all my fans. I promise more exciting fights in the future.”

After a 14-month layoff Brooklyn’s own Frank “Notorious” Galarza (18-2-2, 11 KOs) made his triumphant return to the ring with a lopsided unanimous decision victory over Jaime Herrera (15-5-1, 8 KOs) of Chicago, Illinois. Herrera suffered a cut over his left eye in the fifth round but managed to finish the fight. The judges scored the fight 78-74, 80-72 and 79-73 all in favor of the hometown hero.

The comeback kid was ecstatic after the fight. He said, “I feel good after a 14-month layoff, shaking off some ring rust. I’m so grateful for Main Events to put me on their card. Hopefully I’ll be back in the Garden soon. It felt great, it was where I belong. It felt right. Not many places you can call home but this is one for me. I’m grateful for my supporters, for people who waited it out for me. As a Brooklyn native, a person from New York who’s been around, they support me and that’s the best thing.”

Middleweight prospect Meiirim “The Sultan” Nursultanov (5-0, 4 KOs) of Astana, Kazakhstan needed less than two rounds to stop the previously undefeated Eric Moon (7-1, 6 KOs) of Atlanta, Georgia. The referee stopped the contest at 1:54 of the second round.

“I prepared to fight more rounds,” explained Nursultanov. “I think I showed a very professional fight. Many people thanked me, I win more fans every fight. I’m looking forward to having more success. I want to be a unified world champion someday. I sparred with [Sergey] Kovalev, we helped each other. Tonight’s fight was so far because of this very good experience. Thank you to Sergey.”

New York native “Lightning” LeShawn Rodriguez (8-0, 7 KOs) stopped Alex Duarte (7-3, 5 KOs) of Sao Paulo, Brazil at 1:48 of the third round. Rodriguez recently returned to the ring last month after an 11-month injury layoff. His performance against Duarte tonight proves the 24-year is back!

“It feels good always to win, but to win by knockout is better, sensational, spectacular,” said Rodriguez. “I felt at home. A lot of people came out to see me. This is the first time I’ve fought in New York since I turned pro.”

Former kickboxer Enriko Gogokhia (7-0, 3 KOs) of Zugdidi, Georgia improved his undefeated record with a unanimous decision victory over Jose Abreu (13-3, 8 KOs) of the Dominican Republic. Two judges had the score 59-54 and the third judge scored the bout 60-53, all in favor of Gogokhia.

When asked about the fight Gogokhia replied, “It was a good fight, good opponent with a good record. it was harder because the opponent was ready and he also wanted to win. I was just getting started by the last round. Still, a victory is a victory.”

In the first bout of the evening Bronx native Ismael Villarreal (1-0) made his professional debut with an impressive shutout unanimous decision over Race Sawyer (0-5) of Salt Lake City, Utah. One judge scored the bout 40-35 while the other two scored the contest 40-36 in favor of Villarreal.

After the fight Villarreal said, “It totally felt different than the amateurs. There were so many more people looking at me. I was trying to look good, I was focused on the knockout because it was my very first professional fight. I learned I have to work harder and be careful not to get hit.”

Copy and paste this URL into your browser for photos: https://www.dropbox.com/sh/4wngphka8ycfmg3/AABOFsPYgZz8SmMcbcu09Geha?dl=0

Copy and paste this URL into your browser for scorecards: https://www.dropbox.com/sh/lr4s15kv2gug62k/AADFWZNGzejILyw5g38KggOLa?dl=0 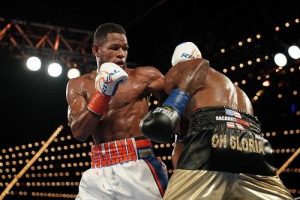 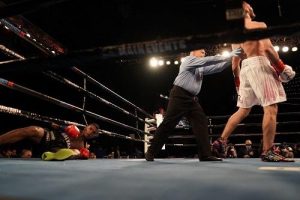 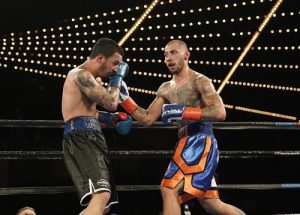 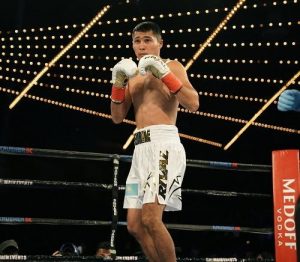 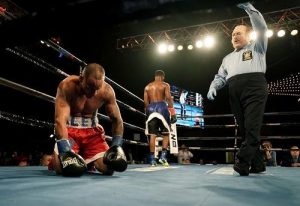 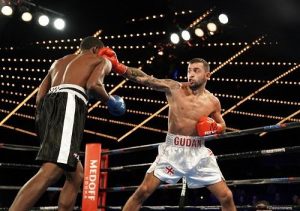 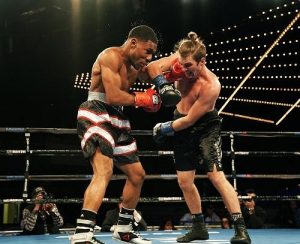 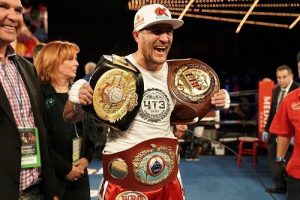