2017 will not have been an easy one for WBO middleweight champion, Billy Joe Saunders when he will step into the ring to fight concussive punching David Lemieux on December 16th. The Canadian will have home advantage, fighting for the title at the Place Bell in Quebec.

Saunders last fought in September and defended against Willie Monroe Jr, a fight that was frustrating to watch due to Monroe’s lack of commitment and overall fighting style of using his reflexes to avoid punches to deliver his own. 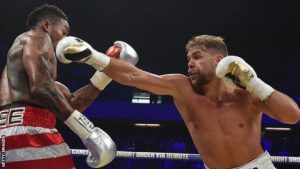 Saunders’ fight with Willie Monroe Jr was frustrating to watch.

But his next defense should involve fighting somebody who is a little more conventional and pleasing on the eye in Lemieux, who has an orthodox stance. The challenger’s record now stands at 38-3 with 33 KO’s to his credit. His biggest achievement so far is winning the IBF middleweight crown when he fought Hassan N’Dam N’Jikam in 2015, but he was to lose that in his next fight when Gennady Golovkin ripped it away from him in that same year.

Lemieux has collected a number of International and Continental titles since his pro debut in 2007 but he has shown that he can be outboxed by keeping his hands a little low and is easily countered. He likes to come forward a lot and trap his opponents on the ropes so he can attempt to go for the knockout.

Billy Joe Saunders, on the other hand, has a good right cross and jab, is a southpaw and when given the opportunity he will throw many assorted punches even though he does not quite have the strength and power that would instill fear into the heart’s of other boxers. Right now, he has a record of 25-0 with 12 KO’s. He has only stopped two opponents since 2012 but his technical ability and sharpness has allowed him to get where he is today. It will be interesting to see if Saunders can take the power of Lemieux, should he get caught by a huge punch.

Will he cope with the pressure and show that he is not just another overhyped Brit? 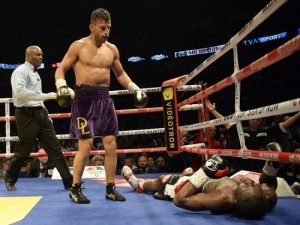 Lemieux will no doubt be the most dangerous contender yet for Saunders but if he can keep his cool and use his technical ability to throw combinations when the Canadian comes forward then he could look forward to beating him in his own back yard. But fighting in somebody else’s territory is always dangerous! Saunders will need to emphasise why he will have deserved the win instead of “just doing enough.”

Saunders v Lemieux should be a more entertaining fight than when Saunders fought Monroe Jr. There is bound to be a lot more action and punches thrown and landed. The entertainment factor will probably have to be produced by Lemieux, when thinking in logical terms. He will just keep trying to get to Saunders and break him down but the Hertfordshire fighter has shown in the past that he can deal with gladiators that desire to walk him down.

The pick here is for Billy Joe Saunders to rain down combination after combination of punches for 12 rounds and claim a unanimous decision while having to overcome a few scary moments in the process.

This is a fight where you definitely should not blink!

Daniel Dubois doesn’t worry about the damage he could inflict on an opponent
3 Exciting Opponents That Anthony Joshua Could Face Next Year
Read more articles about: Billy Joe Saunders, David Lemieux