Errol Spence Jr will be back in the ring on 20th January, 2018 when he takes on the experienced Lamont Peterson. Spence’ IBF title will be on the line which he won from Kell Brook earlier this year. It will be Errol’s first after an extended time out of the ring and he will be making his first defense.

Peterson has been mostly on form since 2014, with only one loss against then unbeaten Danny Garcia by a majority decision. Since then, he went on to win the WBA welterweight crown by beating David Avanesyan early in 2017 but did vacate the belt shortly afterward. Now, he will get the opportunity to fight for his fourth world title. 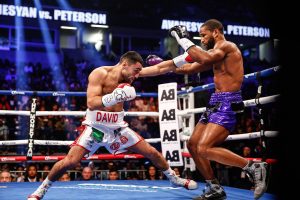 With a record of 35-3 with 17 KO’s, Peterson will be a stern test for the former Golden Gloves amateur champion, who should gain a wealth of experience at world level whether he wins or loses. Peterson has fought world class names such as Timothy Bradley Jr, Victor Ortiz, Amir Khan and Kendall Holt. He has also caused some upsets in his time, with wins over former Olympic gold medalist, Felix Diaz, Dierry Jean and Amir Khan. Spence certainly should not take his eye off the ball!

Peterson likes to often fight up close, digging to the body and head. In terms of defense, his footwork is adequate and he uses upper body movement to weave out of the way of many incoming attacks. But he does also rely on his strong chin to see him through some stormy moments. This can often force him to trade with his opponents. Sometimes it looks as if he has to grind hard to get the result he desires, but it frequently works for him.

Spence holds a lot of power in both hands. He has stopped 19 of 22 opponents including Britain’s Kell Brook in his own country to win his first world title. He is good at catching punches on the gloves and leads with a southpaw jab. It is not uncommon to see him follow up with a left upstairs after off-setting an opponent with the straight. What he does not like is for his competition to get off with their work first, particularly starting with a hard jab, as Kell Brook successfully demonstrated in the first half of their match. If he is not allowed to set the pace then he becomes uncomfortable. 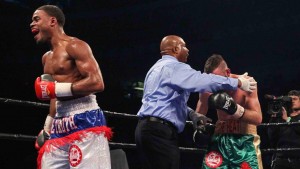 The fight, itself, should be fairly excitable and certainly a taxing one for the new champion. If he can keep Peterson at bay with his jab and thrash him with hard power strikes then he should keep his title at the end. It is unlikely that he will stop Peterson. The Washington boxer has only been stopped once inside 12 before and it took super hitter, Lucas Matthysse to do that. But Matthysse already had years of experience at world level under his belt. In contrast, Spence is still very much learning the ropes. If Peterson can take the hard jab of Spence, rough him up while throwing punches to the head and body then he has a real chance of pulling off another upset.

But this is also an opportunity for Errol Spence to shine, and he will probably want to deliver to prove that he belongs with the likes of Keith Thurman and Terence Crawford, who are considered the Creme de la Creme of the welterweight class.

In conclusion, Errol Spence by a split decision is quite likely.