Kazakhstan fighter, Gennady ‘GGG’ Golovkin is still waiting to learn whether he will be facing Saul ‘Canelo’ Alvarez once again after the two boxers drew in their epic September match amid controversy after many thought that Golovkin did enough to win. There is still hope that the rematch will still be taking place next for both fighters. But what if it does not? What could be next for Golovkin?

For starters, boxing needs the rematch to happen. And happen fast! The fans are sick of being made to wait while each side dictates what they want, issuing many terms which the other finds unreasonable, therefore, causing delays. The sport has had a good year in 2017 and it would be a great feat if 2018 followed suit. It would be a shame if the progress made this year became undone, but it is important to keep a positive state of mind.

Golovkin has expressed interest in unifying the middleweight division, naming WBO champion Billy Joe Saunders as a possible target should he come through David Lemieux in a fortnight.

Speaking to ESPN Deported, Golovkin stated: “If Canelo does not want the fight, obviously I would love to unify. I cannot put pressure on the WBO champion but if he wants, I will be willing because my dream is to have all titles.” 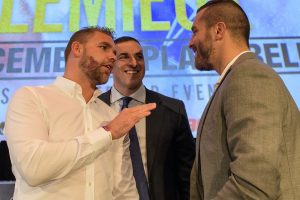 Billy Joe Saunders has to come through Lemieux first before considering the likes of Golovkin.

So, clearly the interest is there. And Saunders would surely relish the opportunity to show that he has what it takes to mix it with premium quality. If he beats Lemieux in exciting fashion then American audiences will take notice and perhaps start to consider that Golovkin could have a worthy adversary to deal with in the meantime.

However, the 37-0 boxer also mentioned that it is possible that he could step up to super-middleweight. There are a lot of tasty names in the division right now including Chris Eubank and George Groves, and it would be interesting to see if Golovkin would carry his tremendous knockout power up to the weight. Many boxers have proven in the past that they are not as effective as they were in their prime weight. Might Gennady have to change tactics and rely more on his skill-set than his power up at 168lb? 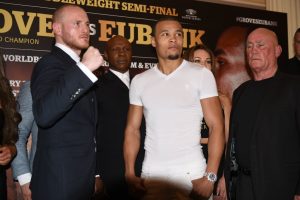 Names like George Groves and Chris Eubank are no walk in the park at 168lb.

Daniel Jacobs is also interested in facing Golovkin again after it looked as if he came off as the superior fighter on the night when the two clashed earlier this year and ‘GGG’ would possibly want to show that he could have had an off night.

But the one that everybody really wants to see, as was already mentioned, is Golovkin v Alvarez! Oscar De La Hoya issued a statement, saying that he will do everything he can to make the fight happen, and that it could happen in September after the former six weight boxing champion said that he has reserved September as a possible month for the fight to occur.

Whatever commences from here on out, it looks like Gennady Golovkin has a few options to consider. But really only one in many people’s eyes!