England’s Scott Quigg will be challenging the hard hitting Oscar Valdez for his WBO featherweight crown on March 10th at the Stubhub Center in Carson. It will be Quigg’s first attempt at a world title at the featherweight limit. Valdez’ record is 23-0 with 18 KO’s while the challenger stands at 34-1, 25 KO’s and 2 draws.

Valdez will be making the fourth defense of his crown and has come through a swath of hard opposition including big hitters like Genesis Servania and Matias Rueda. While the Mexican has most of the hallmarks of a true Mexican warrior including guts, digging body shots and a penchant for going toe to toe he does tend to drop his hands at times and get caught, as he did against Servania when he had to take a count. But like most boxers of that nation, he showed grit to get back up and get a great finish. 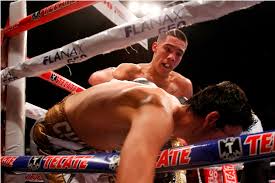 Valdez is quite the monster puncher.

Quigg likes to hit with the right hand to the body and head and keep the fight in the centre of the ring. But the real issue with the Bury man is not so much his technical deficiencies, but his mental fortitude!

It seems like a big occasion can get to him, as it appeared to when he had his long awaited showdown with Carl Frampton. The same thing occurred earlier when he drew against Yoandris Salinas for the WBA super-bantamweight title in 2013. Eventually he loosens up but it takes most of the fight for him to unwind, and by the time he starts with his best work it is all too late! He hurt Frampton to the body a couple of times late in their contest and came on strong late against Salinas, but he will need to work on having more self belief because he clearly has ability. 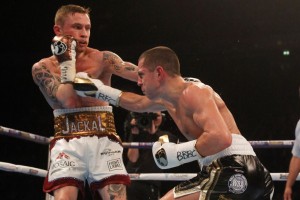 Scott Quigg opens up on Carl Frampton but it was all too late for him. Credit: Matchroom

Even though Quigg has already fought once outside the United Kingdom, there will be a question of whether challenging for a world title in the US will psychologically affect him. There is a big difference between fighting on an undercard in Monte Carlo and being part of a main event in America! Quigg is now based in the ‘Land of Opportunity’ training with Freddie Roach at his Wildcard gym in Los Angeles. Considering that the fight will be staged in California, being in the State for so long beforehand may help him mentally adjust.

Quigg left former trainer Joe Gallagher after six years of parternship after having one comeback fight after being defeated by Carl Frampton. This could indicate that he knows he needs a trainer who will instill more inner strength, which is a good thing. Freddie Roach has never been known for one that people look up to as the voice of courage and wisdom. Coaches like Virgil Hunter and Naazim Richardson fit that bill more. Teddy Atlas is also famous for having gone to great lengths to do whatever it took to give his fighters what they needed to eradicate their unsureness. 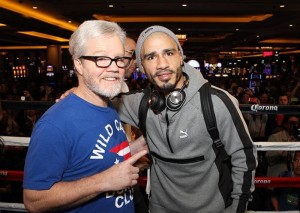 Quigg is now being trained by Freddie Roach (left)

The big question is, will it all pay off?

With the cerebral stuff aside and focusing purely on the physical, smart money would have to be on Valdez for this one. Quigg has not shown anything of dramatic improvement in his last couple of fights under the tutelage of Roach. But if Valdez decides to take it easy, thinking that Quigg will be a formality win, then that is something that he cannot afford to do. The Brit is better than that!

However, look for Oscar Valdez to score a late KO win. If Quigg is at his inner best, he will keep trying until he falls or at least tries to get to the final bell. If he cannot overcome his nerves then a knockout could unfortunately arrive earlier. I am giving him the benefit of the doubt and going with the former.