This Saturday 10th, March 2018 at Ebbw Vale leisure centre, in the South Wales Valleys, fans get another action-packed card brought to them by British Warrior Boxing Promotions.

Making his debut on the card is Cardiff’s David White Jr. The 23-year-old, southpaw will be facing Kieran Holman in the super featherweight division, over four rounds.. David has been around boxing gyms since he was a small child. He now follows his father David into the ranks. Senior boxed as a professional from 2000-2004.

Managed by Riche Garner and trained by his father, there are high hopes that he will have a successful career in the paid ranks. He’s got a good team around him and trains out of Grange ABC. Away from boxing, he is in the building trade, so keeps physically fit even when not at the gym.

His opponent, on Saturday, hails from Sheffield. 19-year-old Kieran Holman has suffered two defeats, since his debut in 2017. ‘The Hitman’ will be looking to make it third time lucky, in Ebbw Vale against White Jr. 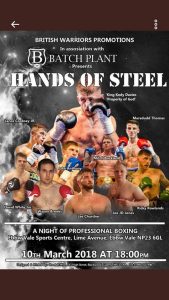 The ‘Hands of Steel’ card features a good mix of established professionals and rising prospects. Middleweight Lee Churcher (13-4-1) will take on Northern Ireland’s Paul Cummings, over six rounds. It will be Churcher’s first fight back since his epic battle with Joe Mullender.

Cardiff’s Mitchell Buckland (12-0) will face Llanelli-based Polish fighter Robert Studzinski (4-37). Blackwood Light Heavyweight Kody ‘P.O.G’ Davies, 23, trained by Gavin Rees, is back in action. He’s been hugely impressive in his first two wins and will be looking to follow that up.