-DeAndre Ware scored the biggest win of his young career as he won an eight-round majority decision over 2012 Olympian and previously undefeated Enrique Collazo in a super middleweight bout at King’s Theatre in Brooklyn, New York.

After a tactical first three rounds, Ware took over the fight with relentless pressure while landing powerful shots to the head and body that forced Collazo to wilt.

Ware, who is a full-time fireman, specifically asked to fight Collazo, and he came through with flying colors as he won by the scores of 77-75 twice, and 76-76.

The bout was the 1st time that Ware navigated the 8 round distance, and he got stronger with each passing round.

“This was the biggest fight of my career,” said Ware. “I am thankful for this opportunity, and I am looking forward to my career taking off after this big win. We are on our way to the top.”

Said David McWater, CEO of Split-T Management, “This was a great win for all of us. DeAndre has been working hard, and was patiently waiting for his opportunity to come, and when it did, he came up with a big performance. He should be a player in the super middleweight division real soon.” 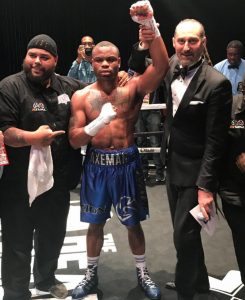 Headed by David McWater, Split-T Management has amassed one of the top stables in boxing.