Olympic Gold medalist and former WBA heavyweight champion, Alexander Povetkin will be on a mission this Saturday evening at Wembley Stadium in London to dethrone multi-belt holder, Anthony Joshua. It is a fight that Joshua, himself, has admitted that he needs to take seriously.

Povetkin, who stands at 34-1 with 24 KO’s, will have to contend with physical disadvantages in height and reach. But as he showed last time out against David Price, he can deal with taller guys. He has beaten many known names including Carlos Takam, Mariusz Wach, Manuel Charr and Hasim Rahman. His only defeat was to Wladimir Klitschko five years ago. He came up short in a points loss but there were many criticisms of that particular bout, mainly aimed at the excessive holding and spoiling tactics that Klitschko employed. It was viewed that Povetkin was not given a fair chance, an accusation that could very well have some basis. 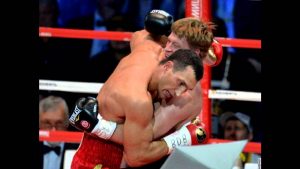 Wladimir Klitschko tried every dirty trick in the book to beat Alexander Povetkin.

Anthony Joshua is at the top of his game right now, riding high off the back of recent wins against Joseph Parker, Carlos Takam and Wladimir Klitschko. The Povetkin fight will only be his 22nd bout. He has scored 21 KO’s. But it could be fair to say that Joshua has gained a lot of experience fighting top tier names during his two-year title reign so far. Does Povetkin, who has been around in the professional game a lot longer, have more?

Logically, I would say so.

The Russian possesses a good right uppercut and proved that he has above average ring intelligence. He showed against Price that he can slip long jabs and has a relatively high work rate, looking for openings to land accurate punches, which he almost always does. Things did not start well for Povetkin against Carlos Takam but he adjusted to take the win.

Povetkin knows how to use educated pressure well, but he does tend to get into scraps from time to time that has forced him to take incoming fire that he never really needed to take. His bull-like rushes have often paid off for him, with Povetkin landing hooks upstairs to stop his opponents.

Joseph Parker tried this from time to time in his fight with Joshua but was unsuccessful, partly because he did not really know how to slip the jab. Povetkin is better than him in this regard.

At the same time, the champion has power in both hands that even the likes of Klitschko and Takam could not take all the way. He almost constantly works behind a solid jab and likes to get off sometimes with an uppercut before breaking away from a clinch. Joshua does sometimes leave his hands low which has seen him get caught with quick clips to the head. He cannot afford to leave his hands low at any point this weekend because he could very well pay a high price! 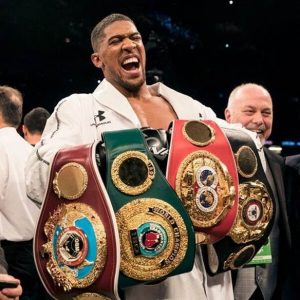 Joshua, seen here, enjoying his reign as the champion of the World.

There have been claims that Joshua is also a little too ‘robotic.’ When he fights he looks pretty predictable. But his 22 opponents would probably beg to differ.

Here is hoping that Deontay Wilder has been pushed to the back of Anthony’s mind because it would be foolish to look beyond this fight. Alexander Povetkin is a very live threat and there is no doubt that he is training like this will be the fight of his life! This is his chance to get himself in the mix and be counted upon as an attractive name for Tyson Fury and American WBC title holder, Wilder. It will also be a chance for Eastern Europe to say that they have a champion once more since Klitschko was dethroned by Tyson Fury in 2015.

Chances and risks cannot be taken here. The Brit will have to try and not become overconfident like so many boxers of the past have during the wrong times which saw their own careers come crashing down, causing them to go back to that infamous drawing board.

The floor could be very slippery and Anthony Joshua will have to tread very carefully!