We saw a short card for Thompson Boxing Promotions’ Path To Glory tonight at the Doubletree Hotel in Ontario, CA. There were five fights on the card, with the main event being the undefeated Saul Sanchez (11-0, 6 KOs) going up against Luis Fernando Saavedra (7-6, 3 KOs). This was a bantamweight bout that was scheduled to go eight rounds. 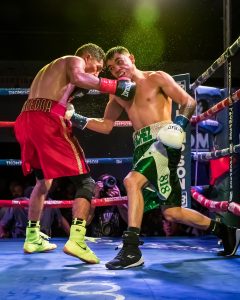 Sanchez came out off the blocks like gangbusters and that lasted for about two minutes of the first round. But Saavedra got very aggressive the last minute and landed many clean, heavy shots. Round two was all Luis. He was laying heavy hands all over Saul for most of the three minutes. Both men came charging out of their respective corners to start off the third and went to pounding on each other. That continued throughout the round. Sanchez looked better in this round than he had in the other two, and was connecting a lot more.

The war really broke out in the fourth, as these two fighters exchanged blows almost shot for shot. It seemed that they were both looking for the knockout. The fifth round was a continuation of the fourth. In the sixth these two were still punishing each other. The pace had not slowed down at all, and there were still six minutes to go.

Nothing different can be said about the seventh. Their hands were still heavy and the contact still strong. In the eighth round they were finishing the way they started – active and aggressive. What a super back and forth battle we saw. We went to the scorecards. Two judges had it 77-75 and the third had a draw at 76-76. The winner was Sanchez. It really was a shame someone had to lose this one. It was a very action-packed fight with both men giving it their all. A fight that was set to go four rounds between welterweights Luis Lopez (5-0, 3 KOs) and Ray Cervera (0-2) was next up, and this was the co-main event. Lopez was the more aggressive and accurate in the opening round. Round two was another strong one for Luis. He landed some very good head and body shots. In the third Lopez was able to display yet more great body work. He had amped up his game from the previous two rounds. Cervera landed his best punch of the night in the fourth and final, but it did nothing to deter Luis. We went to the scorecards. The judges’ scores were 40-36 on all of the cards for Lopez. It must be noted here that Lopez, in observance of cancer awareness month, dedicated this fight to his grandfather, who is suffering from cancer. 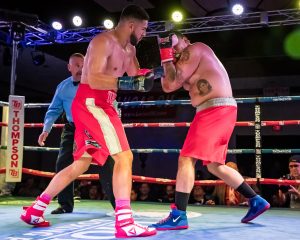 The big men were next as Oscar Torrez (3-0, 1 KO) battled Richard Soto, who was making his professional debut. This heavyweight fight was to go a scheduled four rounds. Despite many punches being thrown the first round was an uneventful one. In round two Soto landed some heavy leather on Torrez.

In the third the tide turned and Torrez had the stronger round. We moved into the fourth and final. Oscar took over the fourth as well, and a barrage of punches put Soto down for eight. We went to the scorecards. Two of the judges had it 39-36 and the third saw it 40-35, all for Torrez. Soto suffered his first loss as a pro. In middleweight action Anthony Franco (3-1-1) faced off with Antonio Luis Hernandez (1-4). This fight was scheduled for four rounds. There was quite a bit of action in the first round, but no damage was actually done. They both came to life in the second and each of them had some good moments, with the momentum leaning towards Hernandez.

In the third and while Hernandez was still have a strong showing, an awkward moment followed by a punch by Franco put Antonio on the canvas. It almost looked as if he slipped first or got his feet tangled up. Regardless, he was down for eight. Both men had there time to shine in the fourth and final and we went to the scorecards. The scores were varied but all for the same man; 40-35, 39-36, and 38-37, all for Franco. 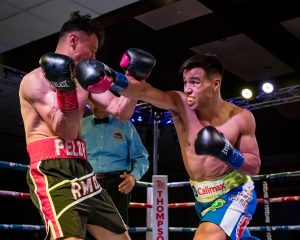 We opened up the evening with a scheduled six round fight between Rafael Rivera (26-2-2, 17 KOs) and Jose Ramos (11-15-1, 8 KOs). Scheduled was the pivotal word here. Rivera’s nickname is Big Bang, and he certainly lived up to that tonight. He dropped Ramos with some huge left hands, but Jose got up. A constant barrage of punches that Ramos couldn’t answer caused referee Ray Corona to jump in and stop the contest at 1:51 of that first round. 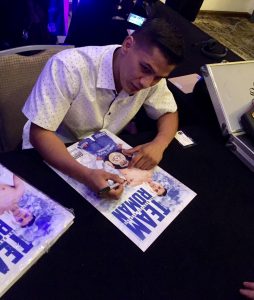 The main event alone was worth the price of admission, as both Sanchez and Saavedra provided non-stop action for those in attendance. Also, before the event took place, the WBA super bantamweight champion Danny Roman was on hand to sign posters and take photos – a nice touch for his many fans.