For their first show of 2019, and marking their 19th season, Thompson Boxing Promotions gave us New Blood, held once again at the Doubletree Hotel in Ontario, CA. Due to the illness of Pedro Moreno, the co-main was moved up to the main event, when Mario Hernandez (8-1-1, 3 KOs) took on Luis Fernando Saavedra (8-6, 3 KOs) in a super bantamweight fight that was scheduled to go eight rounds.

A quick little one-two combination by Saavedra dropped Hernandez early in the first round. That was quite a surprise, and Saavedra stayed on the attack for the rest of the three minutes. Mario tried to turn the tide in the second and had a lot of good things happen for him, but Luis was not ready to just roll over quite yet. The two men really had a battle during the round.

The third was a slugfest between the two fighters. Each one had shining spots, and we were seeing an entertaining fight thus far. The fourth was more of the same. Many punches were thrown and landed by both fighters. Mario was definitely showing that he had the most skill, but Saavedra kept swinging for the fences, and often that worked for him.

Luis liked to counter-punch, and he was really stepping that up in the sixth round, since it was effective for him. The fight continued to go back and forth in the seventh, and we moved into the eighth and final round. The battle raged on, and we went to the scorecards. One judge saw it 79-72 and while the other two had it 78-73, all for Saavedra. He fought a super fight tonight!

In a junior welterweight bout that was scheduled for four rounds, we saw Ruben Torres (8-0, 7 KOs) go up against Elliott Brown (2-7, 2 KOs). The opening round was all Torres, who showed off his skills early. Ruben continued to be all over Brown in the second round, and was able to land his punches at will. The fight was stopped at the end of the round when Elliott could not continue. 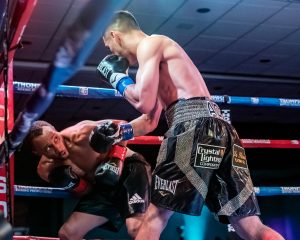 George Acosta (7-0, 1 KO) took on Guadalupe Arroyo (3-15) in a fight scheduled to go four rounds in the lightweight division. There was a lot of action in the first round, although most of it came from the hands of Acosta. He was fast and accurate, and chased his opponent around the ring for most of the three minutes. 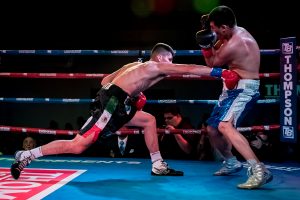 Arroyo was trying to fight back in the second, but that only made for an ugly fight. He wasn’t very successful, and caused Acosta to miss a lot of his shots as well. The third was much of the same. On a couple of occasions George would have Lupe on the ropes but was unable to finish him off. We moved into the fourth and final round.

Arroyo was battered around the ring the entire last round, but made it to the bell. We went to the judges’ scorecards. No surprise here, as the scores were all the same, 40-36, all for Acosta.

Junior middleweights were next when Richard Brewart (4-0, 2 KO) faced off against Abel Reyes (4-3, 4 KOs). This fight was for a scheduled four rounds. Brewart scored a knockdown in the first round, as Reyes took a knee, apparently from a delayed reaction from body shot. We moved into the second round, and a huge right hand by Brewart put Abel down and out at 1:28 of that round.

Opening up the evening we saw Leo Ruiz (4-0, 2 KO) going up against Adan Ahumada (3-7-2, 2 KOs) in a fight scheduled for four rounds in the junior middleweight division. Ruiz showed complete domination in the first round, with good body punches and combinations. In the second round Leo continued with those body punches, and punished Ahumada enough that referee Raul Caiz, Jr. waved the fight off at :49 seconds of round two.

No one suffered with the change in the main event, because that fight turned out to be one heck of a battle. The surprise (on paper) victory went to Saavedra, and he was outstanding in that win over Hernandez.