Chris Eubank Jr showed who was boss when he outpointed James DeGale over 12 rounds at the 02 arena in London yesterday night.

The pair have a rivalry spanning nearly seven years after a sparring session turned nasty when it was claimed that Eubank was getting the upperhand. Finally, the Brighton boxer got his chance to hint whether his claims were true or not.

It appeared that DeGale’s tactics for the fight were to throw and land a punch and then clinch Eubank. This made for a scrappy contest that failed to fully ignite. The first highlight was when Eubank caught DeGale in the 2nd round with a left hook that drove him back. A series of punches followed and DeGale had to take a count. A cut to his left eye certainly did not help his situation. 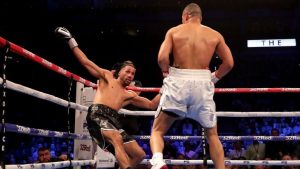 The same occurred in the 10th, also by a left hook, and by this point it looked as if Eubank had built up quite a lead to surely get the win after looking like the dominant man who could do anything with him. But there was a minor blip in events for the man who had it all to prove when he was docked a point in the 11th after throwing DeGale to the canvas. Still, that was not going to be enough to change things around for the former gold medalist.

DeGale tried hard in the final round to rally but his younger, fresher opponent was able to contain him and win by a unanimous decision. 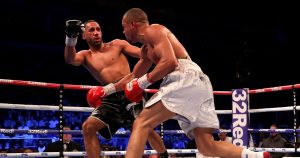 “I knew that he was gonna come in there and run. He’s a very slick southpaw. But the game plan worked. Smart pressure.

“I dominated pretty much every single round. People said I was gonna have my head jabbed off, I proved those guys wrong tonight.”

DeGale was asked what his future is now:

“I’m going to go back and talk to my team, talk to my family. I’ve been to the highest of the highest in boxing. If I call it a day now then I’m good.”

In the chief supporting bout, Joe Joyce got his eighth win and eighth knockout in a row when he stopped former world champion Bermane Stiverne in round 6. The fight was contested for the Commonwealth heavyweight championship, a belt that Joyce won in his 4th career battle against Lenroy Thomas. 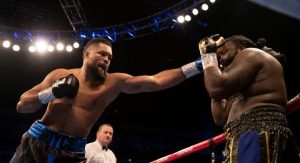 Stiverne weighed in at 273lb the day before the match, and there were concerns that he had turned up just for a pay day. The Canadian’s body language in between rounds of the fight with Joyce certainly told me that he was perhaps only half bothered.

Nevertheless, nothing should be taken away from the European gold medalist who rained down all kinds of punches mainly upstairs on Stiverne. It seemed that Bermane’s main tactic was to try and counter, but he was was rarely successful. Even when he did land, his punches did not seem to affect Joyce at all.

The man who fought Deontay Wilder twice was put down in the 3rd round by an overhand right, but he got up and carried on absorbing more punishment. Joyce had to work to break him down over the next three rounds. In the end, his perseverance paid off when he scored with a jab and an uppercut that reeled Stiverne. The referee soon stepped in for the rescue.

Lee Selby returned in a twelve-rounder against Delaware’s Omar Douglas. Douglas has a reputation for being a puncher, having knocked out 13 of his 19 victims. It didn’t look as if it was going to be a super easy comeback for the Welshman. And that turned out to be right! 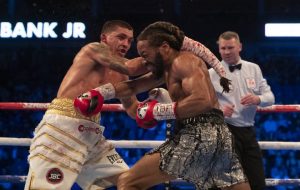 Selby had to weather the storm early on as Douglas resorted to all kinds of dirty tactics including headbutts. Trouble was brewing when he gained a cut in the 2nd round. But over the course of the contest, Selby managed to create enough distance, find his range and snap out the jab and hard right hands among other assorted punches to outbox the American. Selby’s name was read out as the victor by a unanimous decision, with scores of 116-112 twice and the third judge having it 115-114.

The fight was staged in the lightweight division, as Selby plans to attempt to capture a title in that particular weight class. But the fight with Douglas certainly looked career taxing and we can only wait and see if Lee can do what he hopes he can.