The hunt is on again for an opponent for world heavyweight champion, Anthony Joshua after Jarrell Miller failed three drug tests last week while preparing to challenge for Joshua’s WBA, IBF, WBO and IBO titles.

The American was caught using EPO, HGH and GW1516 which contribute toward enhanced endurance and shredding fat. It is ironic that Miller initially accused Joshua of taking illegal substances during their initial press conference to launch promotion for the fight, which was scheduled to take place on June 1st at New York’s Madison Square Garden. It is likely that he will receive a very lengthy suspension which will hopefully send out a message to any other fighter who is tempted to try a similar thing. 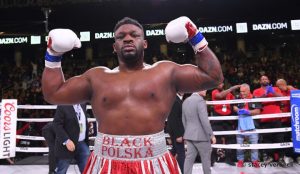 Jarrell Miller probably won’t be fighting for a long time after being caught using illegal substances.

A list of possible candidates have been suggested as a possible replacement for the British boxer. Manuel Charr, Michael Hunter and Luis Ortiz are among the names being considered. Dereck Chisora also reportedly told his manager, David Haye to get his name thrown into the hat.

But it’s the big Cuban that surely makes the most business sense. He put in a courageous performance against Deontay Wilder just over a year ago in a fight where he was outboxing the current WBC champion before Wilder’s power told the story in the 10th round once again. Ortiz has also won three fights since, two of which have come by KO. He last fought only in March against Christian Hammer, but it was a contest in which he cruised through with little problem and minimal damage intake.
There are some potential drawbacks, though.

Ortiz is 40 years old now. He hasn’t been in too many rough scraps but age, regardless, always catches up with all of us in the end. He also is not the fastest heavyweight boxer we have on the scene at the moment. He is a natural southpaw, and Joshua would be his first challenger that he has faced with that particular stance since he beat Charles Martin in 2016 for the IBF crown. Whether that aspect would come into play is anybody’s guess, but it’s always worth noting. 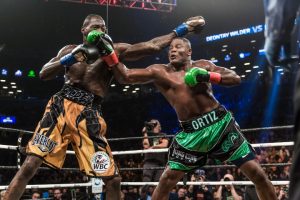 Ortiz put up a great fight against Deontay Wilder in his first world title challenge.

Promoter Eddie Hearn said that Ortiz has been offered the opportunity and he has until Tuesday to make up his mind whether he wants to take it. If he doesn’t then we could maybe be looking at someone such as Manuel Charr. Charr, from Beirut, is little known to both US and UK audiences and probably would not be such an appetising name to potential Pay Per View buyers.

Obviously a fight against Tyson Fury is impossible at this stage since he is scheduled to face Tom Schwarz and there is also the obstacle of him signing a deal with ESPN to televise his fights. So, that is a no go as well. Deontay Wilder is busy training for a mandatory WBC defense against Dominic Breazeale on May 18th. And it has also just been announced that Dillian Whyte will be fighting Oscar Rivas in July. Lastly, Agit Kabayel seems content to be making defenses of his European title in his home country of Germany at the moment. 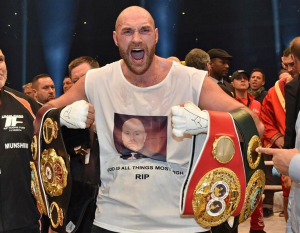 Tyson Fury is also in no position to be fighting Joshua right now.

It really is a complex situation for all concerned right now. It is important to temper your expectations because whoever is finally announced won’t be getting anybody majorly excited.

The reality is, apart from Deontay Wilder, there is not really anybody in the division that poses a serious threat to Joshua’s throne. So, it does not really matter what name is selected for June 1st in terms of who would be the most competitive. It is about what name would sell the most tickets, gain the most DAZN subscribers and sell the most Pay Per Views in the UK.

And Luis Ortiz ticks all the right boxes in that regard.

Scottish world champion Josh Taylor 16-0 (12) fears his career might be sidelined for the rest of 2020 due to the global coronavirus pandemic. The 29-year-old added the WBA junior welterweight title to his IBF belt with a hard-fought points win ov…

Former pound-for-pound number one Andre Ward has broken down a potential matchup between WBC and IBF light heavyweight champion Artur Beterbiev 15-0 (15) and his WBA counterpart Dmitry Bivol 17-0 (11). Ward, who retired undefeated in 2017 with a r…