The sport of boxing raised controversy once again when Amir Khan was made to quit by Terence Crawford on Saturday night during the 6th round at New York’s Madison Square Garden. The fight was for Crawford’s WBO welterweight portion of the championship.

The Bolton boxer was put down in the first round by a left hand that was preceded by a hard right. He got to his feet and fought back, however, he was on shaky legs at the sound of the bell. Throughout the next 5 rounds, Khan had sporadic success by boxing at long range but Crawford always got better of their exchanges and his general ring IQ was always the thing that stood out the most. 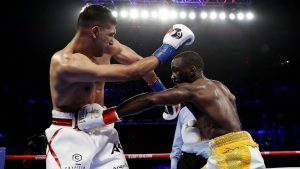 In the 6th, Khan clinched the three weight world champion and Crawford responded by throwing a left uppercut below the waist. Replays of the punch showed that it appeared to land at the top of Khan’s right thigh. The referee, David Fields, passed the challenger’s fate into the hands of his trainer Virgil Hunter who stepped in to pull out his student. Khan, to the dismay of many, accepted Hunter’s decision and the contest was ruled a TKO victory in the champion’s favour.

Okay, there are two things that need to be discussed here.

Firstly, regarding Hunter saving the former two belt champion. If a boxer’s corner makes the decision to stop the fight then it’s their call. The combatant can protest, and many do, but ultimately it will often fall on deaf ears. They have the authority. Still, just the fact that Amir accepted and agreed to Hunter’s decision so easily will earn him the label as a “quitter.”

The term should not always be looked upon as a bad maneuver each and every time.

Kostya Tszyu quit against Ricky Hatton before the 12th and last round could sound and it was later revealed that he was suffering a bleed on the brain. So, there are understandable circumstances from time to time. 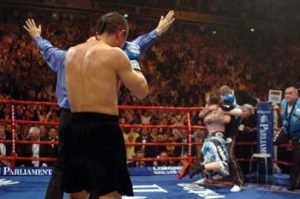 Kostya Tszyu was discovered to be suffering a brain bleed after he quit against Ricky Hatton.

The second and final point of discussion is the low blow. Wherever the punch lands, if it hits below the waist then it’s an illegal throw. So, it is irrelevant where it specifically settles. But most importantly, it does look like it landed on Khan’s top right thigh.

Objectively, that does not mean that he could have easily continued either. As somebody who is in regular contact with a former sparring partner of previous heavyweight world champions Lennox Lewis and Frank Bruno, I asked for his opinion. With a wealth of fighting experience behind him, he let it be known that a punch to any part of the leg can impede mobility. We all know that one of Khan’s better attributes is his footwork and elusiveness. Therefore, it is conceivable that he may have felt that his movement would have been hampered if he and Hunter chose to carry on.

Without one of his main weapons, there is the possibility that Amir would have gotten himself into some serious health risking trouble. There is no doubt that he was losing, anyway, but every boxer deserves to be in the best state possible, even when being on the receiving end of what was surely a coming defeat. 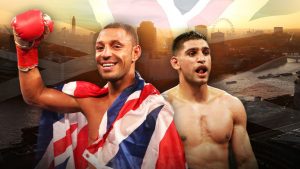 There is a very good chance that Brook v Khan will still take place.

Khan has already stated that he will live to fight another day. Rumours of matches with Conor McGregor and English rival, Kell Brook have been surfacing. If I had to put my money on it then there is more likelihood of the Brook fight taking place than with McGregor, but we will see what comes.

As for Terence Crawford, he may just be in a similar situation as Anthony Joshua soon enough, what with the lack of desirable opponents being on offer right now. Let’s hope that those who look after Errol Spence and Crawford reach a deal and give us the fight we all want to see.

Roy Jones Jr has confirmed that he will appear at the fifth annual Box Fan Expo
Teofimo Lopez continues to be the most talked about fighter in the sport of boxing
Read more articles about: Amir Khan, kell brook, kostya tszyu, Ricky Hatton, Terence Crawford