Probably the most talked about fantasy boxing match up of all time, Muhammad Ali v Mike Tyson has always been a fight that has always gotten us thinking “what if?” Why is pretty obvious. Ali, the brash self-assured Louisville boxer with some of the fastest hands that the heavyweight division has ever seen, against the man equipped with some of the most frightening power that once crushed so many.

It is often said that there were two versions of Muhammad Ali. There was the guy whose reflexes and footwork that was so seemingly perfect that it seemed liked he walked on air. But his exile from boxing between 1967 and 1970 saw his attributes betray him to such a degree that Ali had to overhaul his entire fighting approach. This is what led to the “second” version. Past Pretend has decided to use this particular version. 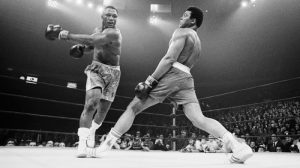 When it comes to Mike Tyson, there were also two versions. There is little doubt that Mike was a shell of his former self after he was released from prison for rape in 1995. He did win back two world heavyweight titles, the WBC and the WBA, however, it’s probably fair to say that he was made to look good given how pensive Frank Bruno and Bruce Seldon (the two men Tyson had to face for these portions of the championship) appeared. Evander Holyfield shortly came along afterward and definitively answered the question of how good Mike Tyson still was. For this reason it has been decided that the first version of “Iron Mike” will be the the most fun to use for such a classic mythical encounter.

So, let’s start with the mental strength of both boxers. It was frequently evident that Tyson was a little fragile in this area. It wasn’t particularly difficult to rile him, especially when an opponent was getting the upper hand. All you have to do is watch that infamous rematch with Evander Holyfield that took place in 1997 for proof of that. But when he wasn’t getting angry, the Brownsville born boxer often looked perplexed and bewildered and could not find ways to turn things around in his favour. 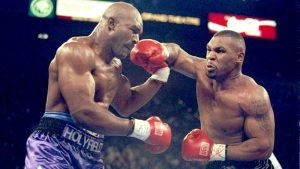 Muhammad Ali, on the other hand, had a tremendously strong psyche. Even when the likes of Henry Cooper almost flattened him with a big left hook in their fight in 1963, he found a way to fight back and claim victory. Then, of course, there was that third fight with Joe Frazier in which both combatants had to contend with the sweltering heat of the Philippines as well as one another. At the end of the 14th round, Frazier’s corner retired their man. There were also such times as when Ali’s jaw was broken by Ken Norton but still fought to the distance with little complaint.

Muhammad Ali and Mike Tyson both had swift hand speed. But the shorter, stockier two time world champion also had the ability to knock many men out with one punch. Boxing isn’t that simple, though. Power can be nullified with good maneuverability, which the “second” Ali still possessed, although not as much as his former self once did. “The Greatest” also had a blistering jab to keep his opponents busy with. And Mike showed that he had issues with taller boxers with a good jab. 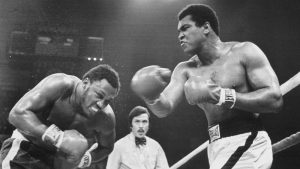 Neither pugilist had the ability to adjust tactics while fighting, but this is a gift that is a rarity to see. That is not to say that the ring generalship was poor from either. Yet, with Tyson I cannot help but feel that what we saw was, at least most of the time, what we always got. Ali came up with fantastic gameplans in preparation for a tough night. It is one of the main reasons why he was able to cause such a huge upset that night of October 29th, 1974 when he beat the fearsome George Foreman by knockout in the 8th round in Zaire. He knew what to look for to spot weaknesses that he could capitalize on. Tyson, not so much although his penchant for boxing lazily didn’t often help him.

Another important factor is defense in this fight. A prime Tyson had great upper body movement to evade most punches. With Ali, his offense was often his defense. He liked to keep adversaries at bay with the jab and maintain the right amount of distance. But he had a granite chin and could often afford to take punishment if necessary. The former Baddest Man on the Planet also had decent punch resistance. His resistance was just not as good as Ali’s.

So, how would the fight pan out over 15 rounds?

I do not think whether the fight was scheduled for 12 or 15 rounds would matter in this contest. I can envision Mike coming out from his corner fast and trying to lay it all on Ali during the first 5 or 6 rounds. The taller man would have problems landing his jab during the first quarter or so, but he would gain accuracy as the fight goes on. Ali would frustrate Tyson by clinching when necessary. Mike would even throw in a cheeky elbow or two! But his durable competitor would shrug them off. As the fight progresses, the mental toughness of Ali would show while Tyson would slowly start to crumble as he fails to land a killer blow. He would find himself caught with more punches, maybe even cut which would spur Muhammad on.

Eventually, Tyson would find Ali’s spirit too much to contend with as he lay trapped on the ropes and a barrage of unanswered blows would come raining down on him as he stared at the face of defeat while on his feet somewhere around the 9th round.

Anthony Joshua: “I have to box a lot smarter against Andy Ruiz Jr”
Is Wladimir Klitschko hinting at a ring return vs. Anthony Joshua?
Read more articles about: Mike Tyson, muhammad ali

You never really know what’s going on in the mind of Adrien Broner, but the fact is he remains a huge draw in the sport of boxing. The 31-year old fighter recently sat down with Brian Custer to discuss several topics related to his career. Bron…