Ricky Hatton and Junior Witter can retire and look back upon their illustrious careers full of British, European and World titles. But, despite the demand, there was one much heavily anticipated domestic dust-up that boxing and the fans never saw. And that was the pair facing one another inside the ropes.

The flashy Yorkshireman, who fought out of the famous Ingle gym led by the legendary late trainer Brendan Ingle, possessed quick reflexes and an awkward style for anybody who fought him. That includes such names as Zab Judah, who was the then reigning IBF light-welterweight champion back in 2000 when the Englishman and the American clashed. Judah was taken the full 12 rounds before winning a unanimous decision to inflict the first loss on Witter’s career. 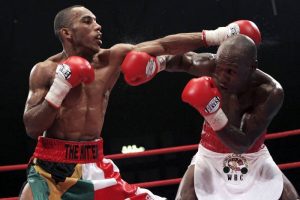 After his first unsuccessful world title attempt, “The Hitter” racked up a series of low key wins which included obtaining the British, Commonwealth and EBU titles. Hatton was also keeping himself busy during this time by making defenses of his WBU title. Witter would make appearances at a number of his fights and vocalize his desire to fight the Stockport born “Hitman.” But one of the main issues as to why he was never granted the opportunity was most likely to do with the fact that he was not a big ticket seller. His boxing style could be frustrating to witness since Witter liked to clinch when his opponents went on their attacks and he did not have huge punching power despite being a half decent counter puncher. What can be added to these factors was that Junior could pose more problems than his stock was worth. A case of high risk, low reward.

Nevertheless, Witter finally became a world champion when he beat DeMarcus Corley in 2006. But he was still unable to tempt Hatton for a showdown since his rival had plans in place to take America by storm and aim to fight the very best of the division which eventually resulted in a fight with Floyd Mayweather Jr in December, 2007. This fight shattered several UK Pay Per View records. 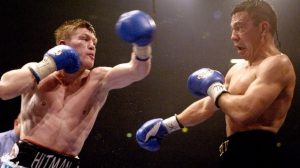 Meanwhile, Witter was confined to making two successful defenses of his WBC crown in England before finally coming unstuck against the unbeaten Timothy Bradley, losing by a split decision. While Hatton was still having some success at world level over the likes of Paulie Malignaggi, Junior never regained the momentum he had earlier in his career although he did regain the British crown in 2012.

Ricky was a devastating body puncher in his prime, finding all kinds of openings from different angles that halted many in their quest to prevent him from having the glory that he attained. His work rate was phenomenally high, even during the later rounds. And while he did not have concussive power, the volume of his punches were such that they overwhelmed 32 of his 45 victims. He had a fan friendly style that made him popular wherever he fought, whether it was in the US or in the UK.

But if we could go back in time and change history to the extent that Ricky could have been persuaded to take the Witter fight then would it have lived up to the hype? I do not mean to be hard on Junior, but there is a high chance that the contest would have been a laborious fight to watch. Ricky would be trying again and again to keep the punches coming but he would find himself being tied up repeatedly throughout. “The Hitter” would occasionally get through with the odd clean counter punch but his power would not be enough to deter the ever determined Hatton. The difference in the level and class between the two would evidently show.

It would have been a match with an immense amount of build-up. But it sadly would not live up to the hype as both guys would make it to the final bell with Ricky a clear winner by a unanimous decision. After some contemplation, Junior Witter would probably go his way to continue his hunt for world honours which would have been just as likely to have been as successful as the way things really turned out the way they have. His spirit would not have been wilted, and that could only have been a good thing for him.