The desire for world title honours is still there for Hughie Fury after he despatched Canadian Chris Norrad yesterday in the 2nd round at the Victoria Warehouse in Manchester.

A series of right hands to the head forced Norrad to take a knee in the aforementioned round before failing to beat the 10 count. Even though he began to make his way up at the count of 9, he seemed astonished that this tactic was the incorrect one. For Fury, though, it was a contest that seemed like more of a warm up bout for a bigger one in the future than a fight that was supposed to legitimately test him. Crowds love knockouts but it does not do the boxer much good when he is doing something that does not challenge him. It is the harder ones that bring more long term benefit.
Fury admitted that last night was easy work. 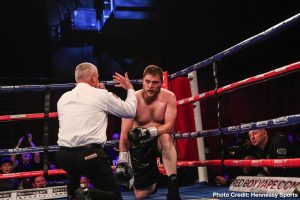 Chris Norrad was out of his depth against Hughie Fury.

He said after the fight, “I was messing around in there, taking my time,” Fury added. “At this level it’s easy for me.”

Fury has lost two of his last four fights, however, those two defeats have been against world class opposition. His first world title bid ended in failure when he was defeated on points by Joseph Parker in 2017. Kubrat Pulev was the second man to inflict a loss in October of last year. But still only at the age of 24, time is still on the side of the Cheshire boxer.

With a height of 6’6 and an 80″ reach, he has the physical tools to be effective in the heavyweight division. But if only physical attributes alone were all that was needed! A good boxing IQ, heart and the desire to stay in good shape are just a few of the other ingredients. But some boxers have a more natural gift at fighting, while others need to gain enough experience in order to get better at it. And Hughie stated as much last night.

His next outing is reportedly to be in September and his trainer and father, Peter Fury, insists that the opposition next time will be of a much higher calibre. It needs to be. Doing combat with the likes of Chris Norrad will simply not give Hughie the things he needs to learn about. It may make his record look more impressive but numbers only tell a fraction of the real story. 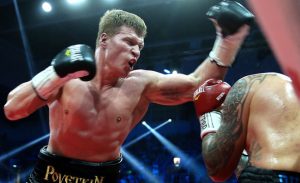 Alexander Povetkin has been mentioned as a possible future opponent.

Furthermore, Peter has stated to IFL TV that he would want his son to face Alexander Povetkin sometime in the near future. But it may be in Fury’s best interests to work his way up more gradually in order to gain the necessary experience at the varying levels.

The only way to do this is to start with targeting the domestic scene. There is some top notch talent there with the likes of Daniel Dubois, Joe Joyce and Nathan Gorman. If he can get past the likes of them then European level would logically be the next step. And then finally, the world scene.

It seems that Fury’s team are confident enough that he can look past British and European levels already but most of the time it has been proven in the past that it is a bad idea to take shortcuts in boxing. It can backfire drastically. So, maintaining a grounded and realistic perspective is imperative. That can be hard to do when you are training somebody that you have an emotional attachment to like Peter does with his son.

Hughie Fury is a soft spoken lad and he comes across as a nice enough young man. It is difficult to root against somebody like him. He just needs to realise that there is no rush, and providing that he dedicates himself, then good things can come.