Star Boxing was pleased to ring in the start of the 30th anniversary of International Boxing Hall of Fame Induction Weekend at today’s official press conference ahead of Friday night’s highly anticipated seven fight card, headlined by 6-time world champion, ZAB “SUPER” JUDAH (44-9 30KO’s), and New York knockout artist, CLETUS “THE HEBREW HAMMER” SELDIN (23-1 19KO’s). The celebration kicked off with ANTHONY PICENTE, Onieda County Executive, who said, “this is a world class resort. It always has been and always will be. Joe [DeGuardia], I want to thank you for bringing this event here and working with Turning Stone to make this happen. It is an exciting time for Onieda county.”

Next, fans and media in attendance got to hear from ED BROPHY, Executive Director, International Boxing Hall of Fame. “It has been a magical 30 years with the biggest names in boxing here in Canastota,” Brophy continued, “the main event is going to be exciting. Zab has the name and the titles, but it’s going to be a tough fight against Cletus Seldin….It’s going to be a great night of boxing.”

Star Boxing CEO JOE DEGUARDIA took to the podium, speaking on the significance of Star Boxing’s connection to International Boxing Hall of Fame Induction Weekend, and spoke on the thrilling fights set to go on Friday night. “It is truly a pleasure to be part of this week here at Turning Stone… this is a special time for boxing,” said DeGuardia. “We are at a place, [Turning Stone], which has become a true friend to boxing because they put on the best shows year after year. In these fights, we really can’t predict what’s going to happen and that goes right up to the main event. These are all going to be thrilling 50-50 fights.”
PRE-ORDER
JUDAH-SELDIN
HERE!
Continuing the theme of the weekend, Star Boxing will feature two fighters on June 7th’s card who have a golden family lineage of legendary fight history. JAMES MCGIRT JR. (27-3-1 14KO’s) will be fighting in the co-feature bout against DAVID PAPOT (22-0 3KO’s) for the WBO International and WBA Intercontinental titles, on the same weekend in which his father, “Buddy” McGirt, will be inducted into the International Boxing Hall of Fame. Also on the card is, ROBERT DURAN JR. (2-0 2KO’s), son of storied multi-time world champion, Roberto Duran. Along with this, in Duran Jr.’s corner will be the “Pazmanian Devil,” multi-time world champion Vinny Paz. The legends will be out in full force all weekend, including fight night (June 7th).

The entire seven fight card will be available via FITE.TV PPV. FITE, the world leader in the digital distribution of combat sports will stream the event live on the www.FITE.TV website, FITE mobile apps for iOS, Android, and the FITE channels of Amazon Fire, Android, Apple TV, and Roku on a PPV basis. The FITE PPV will be available for just $14.99. Check availability in your area by going to the FITE.tv website.

If you missed todays presser, you can watch it, on replay, HERE.

TICKETS:
Boxing fans will also have an opportunity to mingle with some of the biggest names in boxing, including boxing VIPs and Hall of Famers. Turning Stone will offer a unique boxing fan experience for guests who purchase tickets for the June 7thJudah vs. Seldin fight. For $50 (plus the purchase of a ticket), guests will receive access to the Boxing Hall of Fame Lounge, where boxing VIPs will be socializing throughout the night.

ABOUT:
June 7th’s main event features, Zab “Super” Judah (Brooklyn, NY 44-9 30KO’s), a six-time world champion, and the last undisputed welterweight champion of the world. Judah has defeated some of the most notable names in the business, including, Micky Ward, Lucas Matthysse and Cory Spinks (Undisputed Welterweight Title), and fought many other top fighters including Floyd Mayweather, Amir Khan, Danny Garcia and Miguel Cotto. Opposing the six-time and former undisputed champion will be New York’s feared knockout artist, Cletus “The Hebrew Hammer” Seldin (Shirley, NY 23-1 19KO’s). Seldin broke on to the national scene when he devoured Roberto Ortiz at the Nassau Coliseum in a featured HBO fight. One month later, Seldin became the first boxer alongside Hall of Fame world champions, Mike Tyson and Roy Jones Jr. to fight in featured fights on back to back months on HBO. Judah-Seldin will be a scheduled 12-round bout, for the vacant NABA Super Lightweight Title.

On the biggest weekend in boxing, with many Hall of Famer’s in attendance, #JudahSeldin is bound to set off fireworks at Turning Stone on June 7th.

In the co-feature bout, James “Buddy” McGirt Jr. (Vero Beach, FL 27-3-1 14KO’s) will look to tip his hat to his father, James McGirt Sr. who is being inducted into the International Boxing Hall of Fame during the same weekend, when he takes on tough undefeated Frenchman David Papot (Saint-Nazaire, France 22-0 3KO’s). As a professional McGirt has found success and has faced some well-regarded fighters in his division, including, Carlos De Leon Jr., Edwin Rodriguez, and Raymond Joval. His opponent, undefeated Frenchman David Papot is taking the trip across the Atlantic Ocean with intentions of ruining the McGirt family weekend. Papot had 102 amateur bouts, 30 of which were with the French National team, earning French National Champion honors two times. In 2017 Papot earned the WBA Continental Middleweight Title, and later that year became the French National Super Welterweight Champion, having since defended the title three times. Papot-McGirt is a scheduled 12-round bout, for the vacant WBA Intercontinental and WBO International Middleweight Titles.

Turning Stone will be announcing additional events for Boxing Hall of Fame Weekend shortly. For more information about events that have already been announced, visit here.

ABOUT STAR BOXING ®:
For a quarter century, Star Boxing keeps on swinging! Star Boxing has consistently delivered boxing events of the highest caliber and attracts loyal fans from all corners of the globe. From the Antonio Tarver – Roy Jones trilogy to the meteoric rise of Chris Algieri and Joe Smith Jr. through the Rockin’ Fights Paramount Series, Star Boxing continues to work with and develop world rated contenders and red-hot prospects into future world champions. Star Boxing is revered worldwide throughout the industry for its credibility, integrity, and exciting fights. 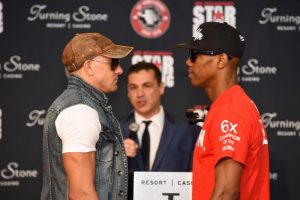 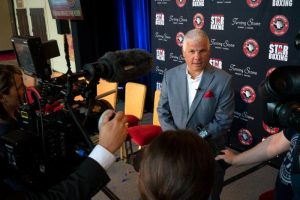 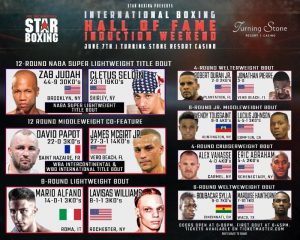 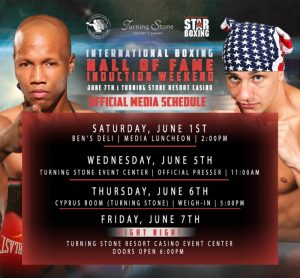