The longest reigning heavyweight champion of all time, Joe Louis is often criticised for not frequently facing stiff competition during his championship reign. In fact, there were a particular thirteen opponents he defended against that are thought to be so below his level that the collective term for them was “Bum of the Month.”

But what if the “Manassa Mauler,” also known as Jack Dempsey, had shared the ring with the “Brown Bomber?” Would it have been a competitive contest? An exciting one? A dud?

Louis’ twenty five defenses in twelve and a half years has certainly gained him legendary status among the heavyweight greats in the history of boxing. His pinpoint accuracy, spearing jab and the reluctance to give the ring away made him a tough nut to crack for anybody who fought during his time. Famous names such as Joe Walcott, Billy Conn, Max Schmeling and Jim Braddock all folded. Schmeling was one of the few to have inflicted one of Louis’ three defeats on his record in 1936 in a huge upset. The result was different in their 1938 rematch, however. 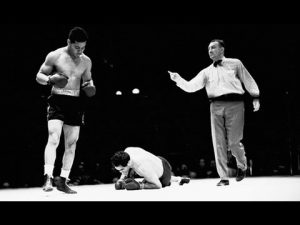 Although Muhammad Ali is frequently given credit for uniting fans of different races and cultures, it was Louis’ quiet and likeable nature that made him loved by fans of various skin colour. Decades later, Ali took that further with his flamboyant personality. But it is undeniable that Joe had the ability to persuade many that black people had, and do have, a lot of value to give to the world. And that it was down to the individual in terms of how their personalities are defined.

In 1950, Louis lost the then known National Boxing Association title to Ezzard Charles and, despite racking up an eight win streak, would never find himself with a belt around his waist again. His ring finale arrived in 1951 when he fought Rocky Marciano in his last championship bid. At the age of 37, he could not pull the trigger anymore and he was soundly beaten in eight rounds. He was paid $132,000 in comparison to Marciano’s $44,000. A surreal fact to realise considering that Rocky was the champion.

But years before Louis even fought his first professional contest, Jack Dempsey was thrilling audiences with his raw looking aggressive boxing style. Drawing with Young Herman in his debut, it looked as if Dempsey would go on to fight for the simple love of it and to make ends meet. During the next four years, from 1914-1918, he would enjoy mixed success. He would taste defeat several times and draw in various different battles.

But something changed for Dempsey at this point! He would rack up a nine win streak. One of those in particular is probably the most famous one sided drubbing of all time when he fought Jess Willard in 1919. Both fighters had to weather the 110 degree heat but it never seemed to have much of an effect on Dempsey, who knocked Willard down no less than seven times over a total of three rounds before Dempsey was declared the winner. The “Pottawatomie Giant” suffered various injuries including broken bones and several missing teeth.

On July 2nd, 1921, Jack would make history when he challenged for the heavyweight title against Georges Carpentier. The fight was the first ever million dollar live gate and generated $1,789,238. The Frenchman could not find any answers to Dempsey’s aggression and determination and found himself on the canvas twice in the 4th round enroute to a knockout. Three defenses followed, one of which in particular was an exciting, high tempo fight with Luis Angel Firpo. Both boxers went down in the 1st round, with Firpo having to take a count seven times and Dempsey twice. Luis suffered double knockdowns in the 2nd and wasn’t able to make the referee’s count after the subsequent canvas visit. 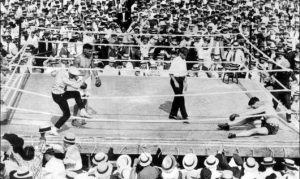 In what was supposed to be a routine heavyweight title fight victory for the Colorado based champion, Jack shockingly lost to Gene Tunney on September 23rd, 1926. Not only did he lose, but he lost convincingly! The number six may have been his unlucky number as it was his sixth title defense.

One more fight against Jack Sharkey the following year had many convinced that Dempsey was a shadow of his former self. Sharkey was able to get the better of his man before being knocked out controversially in the 7th round when Dempsey threw a left hook upstairs that landed on Sharkey’s chin. Moments before, Sharkey turned to the referee to complain about the low blows that Dempsey was allegedly hitting him with and it seems that the former champion took his opportunity.

However, despite the fact that the challenger was attempting to move up in status once more in a rematch with Tunney, the result would be the same for him on 22nd September, 1927. In one of the most contentious rounds ever, Dempsey would put Tunney down in the 7th round by a left hook. It appears that he forgot about the rule that dictated that if a boxer knocks down an opponent then he must go to a neutral corner before the referee begins his count. Several seconds went by before Dempsey did so, and Tunney was able to make to his feet and last out the round. Jack, himself, was knocked to the ground in the 8th. The judges were all in agreement that Gene was a clear winner. Retirement shortly followed for Dempsey after this.

A fight between these two titans would have been one of the toughest of each boxer’s careers for different reasons. For Louis, it would be because of Jack’s ferociousness. For Dempsey, it would be because of Louis’ supreme technical ability. You wouldn’t need to schedule 15 rounds between these two. Dempsey would come out throwing and giving everything he had. But Louis’ long left jab would land with relative ease and would be able to tame that aggression to a degree. Both guys were hard to back up, so it would be toe to toe action for much of the contest. Dempsey might have tried to back Louis against the ropes but Joe was great at getting out of tight spots.

The accuracy and ring IQ of Joe Louis would have been a little too much. I predict that Jack Dempsey would never make the referee’s count after he went crashing down from a big right hand in the 10th in one of heavyweight’s most furious of fights!