Thompson Boxing Promotions’ Path To Glory took place at the Doubletree Hotel in Ontario, California. The main event of the evening was a fight scheduled for eight rounds in the welterweight division, and featured Angel Ruiz (14-0, 11 KOs) going up against Miguel Zamudio (43-13-1, 27 KOs).

This fight did not last long at all. Quickly proving that he had power in both hands, Ruiz just pummeled Zamudio and referee Raul Caiz, Sr. had to step in at 1:37 of that very first round to put an early end to the contest. Junior middleweights took to the ring as Richard Brewart (6-0, 2 KOs) faced off against Antonio Duarte (2-1). This fight was to go a scheduled six rounds. The two fighters spent the first part of the opening round measuring each other a bit, then began to throw some punches. In the second round, Duarte had a very strong first half of the fight, and Brewart was tough in the second half.

The third round was an interesting tug of war between the two. Neither took complete control, but each had great moments. Brewart was able to connect with the harder punches in the fourth round. Duarte was still hanging in there, but Richard was beginning to wear him down as the fight went on.

The fight had definitely swung in Brewart’s favor in the fifth. Most of the punches he threw landed, while Duarte was trying to find his opponent but was unable to most of the time. Richard continued to that strong path in the sixth and final. Antonio never slowed down, but his lack of accuracy hurt him in the later rounds. We went to the scorecards. One judge had it 60-54, while the other two gave scores of 59-55, all for Brewart. 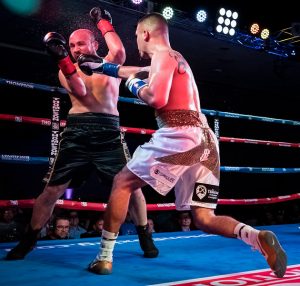 Mario Hernandez (9-1-1, 3 KOs) took on Victor Trejo Garcia (17-11-1, 8 KOs) in a bantamweight bout that was schedule for six rounds. We saw a good back and forth round to start off this contest, with both men scoring some points. The action continued into the second. Both men were once again landing, but Hernandez had more power behind his punches.

Garcia was starting to push Hernandez around in the third when suddenly Mario turned the tables on him, smothering him and finally putting him on the canvas. It almost looked like a slip, but referee Raul Caiz, Sr. began the count. Victor made it up at the count of eight and the fight continued. Mario might have kept his edge in the fourth, but Victor was still on the attack.

Hernandez certainly had the fight on accuracy and raw talent, but Garcia was trying to measure his shots. He just wasn’t as skilled a fighter as his opponent. The sixth and final was a good one for Victor, until at the 10-second mark Mario was really able to land and score. We went to the scorecards. They read 57-56, and 59-54 twice, all for Hernandez.

It was time for the big boys as Oscar Torrez (6-0, 3 KOs) faced off against Allen Campoy Ruiz (0-2). This heavyweight fight was scheduled for four rounds. To everyone’s surprise, a few seconds into the first round, Ruiz landed a short little shot on Torrez that dropped him. But from then on Torrez was landing strong body and head shots.

In the second a left/right combination by Oscar dropped Ruiz, then a short left to the body put him down again. The fight continued into the third. A right hand put Allen down for the third and what proved to be the final time. the referee Rudy Barragan waved the fight off at 1:08.

To open up the evening we saw featherweights Jose Tito Sanchez (3-0, 2 KOs) go up against Pedro Melo (17-21-1, 8 KOs). This bout was scheduled to go four rounds. There was quite a bit of action in the first round, with most of it coming from Sanchez. A solid left hand landed for Sanchez near the beginning of the second round, but he was unable to capitalize on that and get Melo out of there.

Jose was all over Pedro in the third, landing body shots and combinations at will. Still, Melo stayed in there and we moved into the fourth and final round. Nothing changed in the fourth and we went to the judge’s scorecards. Not surprisingly, all three of the judges saw the fight the same, 40-36, all for Sanchez.