What happens when two of boxing’s biggest heavyweight hitters collide? Only Earnie Shavers and Sonny Liston would be able to tell that story if they had ever met in the squared circle.

Born in 1930, Liston has always been a controversial figure in boxing. His known dealings with the mob that are thought to be who heavily controlled his boxing career and some of the most unexpected outcomes to some of his fights make him, somewhat, of an enigma. However, there were not many men that could survive his crushing blows that were often preceded by a sharp, methodical jab. Armed with underrated footwork, Liston was adept at avoiding some of the most threatening blows by the fastest of heavyweights including Floyd Patterson. Once he had his opponents reeling, they very rarely were “let off the hook” and it wouldn’t normally be long before the referee waved off fights in his favour. Perhaps unfairly, Liston is mostly remembered for his two fights with Muhammad Ali. He shockingly quit at the end of the 6th round during their original encounter on February 25th, 1964 , a decision that literally shocked the world! A rematch was set for 25th May, 1965 with former world champion, Joe Walcott serving as referee. Mysteriously to many, Liston would hit the floor by a punch that is still believed today to have not been concussive enough to stop one of the most intimidating boxers of that era. Walcott confused the situation further after having trouble getting Ali to go to the neutral corner and then losing progress of the time keepers’s count. He would never oversee another contest as referee again.

But away from all of the disputes of the Ali situations, it is easy to see why Sonny was feared by many. He put away good quality opposition such as Zora Folley and Cleveland Williams early in stunning fashion and racked up fourteen straight victories after the Ali rematch, even though he would never go on to fight for a world title again.

But unlike Liston, Earnie Shavers would never have gotten as lucky to have become a world champion. He had a somewhat raw boxing style, never really using the jab to set up other punches but he always had the potential to destroy with both fists. And with a finishing record of 74-14-1 with 68 knockouts to his credit, he often did! Shavers was competent at fighting at close range but he could be outboxed. But that did not prevent the likes of Larry Holmes to be floored heavily in a WBC title defense and Muhammad Ali to realise that he had just been through a taxing war. Ken Norton, who beat Ali in their first fight, suffered an unsettling first round knockout as did Joe Bugner who lasted the distance twice with The Greatest. But it is probably fair to say that if Shavers had polished up his skill set just that little bit more then maybe he could have seen his world ambitions realised. 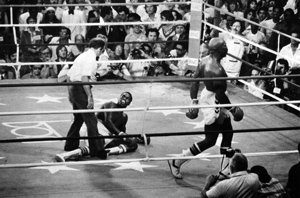 Still, that does not prevent him from going down in history to be heavily thought of as boxing’s hardest puncher. And sometimes that alone can be enough to consider him as an exciting element for a Fantasy Fight.

If Liston and Shavers had met then the fight would surely have been a hot ticket seller, especially during boxing’s hey day of the 1970’s. Liston’s superior and regular jab, as well as his swift footwork, would have been enough to take this one. But there would have been tension for every second of every round that the fight lasts due to the exciting possibility that Shavers could land one of his cannons. If he did then he would surely have put Liston in a lot of trouble! Nevertheless, I can see Sonny’s hand being raised after a finish in the 9th round.