There are a number of juicy “Fantasy” fights that we could all conjure up in the featherweight division. But there is one in particular that would inevitably have become the Hispanic fight of the Century if Salvador Sanchez and Alexis Arguello had given us the answer as to who was the true featherweight king. Not only that, but I personally feel that that such a fight would have raised the profile of the division much sooner than it was in the mid 1990’s when Naseem Hamed made the public stand up and take notice of the efforts of combatants below welterweight.

A story that is ever familiar in boxing, Alexis Arguello grew up in extreme destitution in Nicaragua. He managed to emigrate to Canada to work on a farm at the age of thirteen and found himself regularly fighting on the streets and gaining the taste for fistic violence. Eventually, he found boxing and had a hurried amateur career that ended with obtaining a record of 58-2. 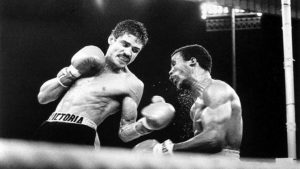 Arguello’s professional debut began on Ocober 26th, 1968. It didn’t start that well for him. After gaining three wins, he suffered two losses in a row thereafter. But he grit his teeth and was determined to improve! And so he did, becoming victorious in his next sixteen fights before facing his third defeat. Twelve more successes followed before fighting for the WBA featherweight crown in 1974. Arguello bravely, yet clearly, lost a unanimous decision against Ernesto Marcel. But in that same year in November, Alexis faced the legendary Ruben Olivares and won by knockout in the thirteenth round to win the same title he fought for just nine months earlier.

After a string of defenses, Arguello moved up to the super-featherweight class and won the WBC version of the championship on 28th January, 1978. Scotland’s Jim Watt was the WBC holder at lightweight in 1981 and stepped into the ring against Arguello at Wembley on June 20th of that year. Although surviving the distance, he lost over fifteen rounds to the younger but taller two belt former champion. 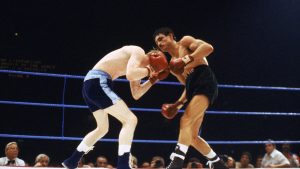 A famous victory over the then unbeaten Ray Mancini followed and in 1982 he stopped Kevin Rooney with one punch, who would soon go on to train one of boxing’s most fearsome heavyweights ever in Mike Tyson. But on November twelfth, Arguello would fight the light-welterweight champion Aaron Pryor. Pryor was originally slated to box Sugar Ray Leonard. However, an eye injury scuppered any prospect of that clash happening and so a bout with Arguello was made. This was the three weight champion’s fourth experiment in terms of seeing how many weights he could grab a world title in. If he succeeded, he would be the first fighter to be a four weight champion. And although he was 12-5 on favourite, he came unstuck in the fourteenth round when a barrage of unanswered punches rained down on him which forced him to be rescued by the referee. It was Pryor’s sixth title defense of his WBA title.

Two comeback fights setup a rematch with Pryor on September 9th, 1983. This time, the champion was the favourite to come through. And this time, the outcome was more definitive as Arguello was knocked to the canvas in the first, fourth and finally in the tenth which convinced him to not bother making the count. 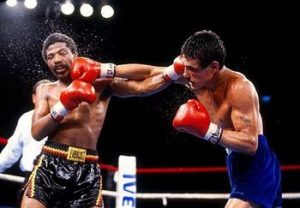 After boxing, Alexis pursued a career in politics and was chosen as vice mayor of Managua in 2004. But on July 1st, 2009 he sadly committed suicide by gunshot with a 9mm pistol. It was known that he suffered depression throughout his life and used drugs in an attempt to escape the demons that always pursued him. But despite the tragic conclusion to his time on Earth, his boxing legacy will always remain.

Born on January 26th, 1959 in Mexico, Salvador Sanchez would tragically not fulfill his bid to become the best featherweight of all time. After only having nine fights as an amateur, he would go on to target world titles and big money in the paid ranks starting on May 4th, 1975. He lost his first bid for a belt in 1977 against Antonio Becerra by a split points loss. Apart from a draw in his fight with Juan Escobar, Sanchez would never see another blemish again. On February 2nd, 1980 Danny Lopez had to take a dominating TKO defeat, losing in the thirteenth round and his WBC crown along with it. 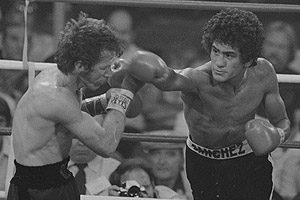 Sanchez would make ten successful defenses over the course of the next two years. He would beat big names like Wilfredo Gomez, Azumah Nelson and Juan Laporte. Lopez also received another opportunity and again was halted, this time in the fourteenth.

His record standing at 44-1-1 with 32 KO’s, a shocking and abrupt end to Salvador’s life occurred on August 12th, 1982 when he was involved in a severe car accident. Discussions had already taken place about a possible bout with Alexis Arguello, but obviously it was not to be. 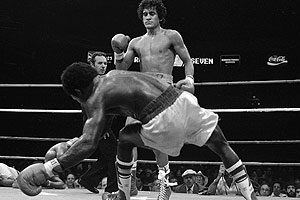 The hypothetical clash between Alexis Arguello and Salvador Sanchez would have been a featherweight fight for the ages. The Nicaraguan had a tough chin, liked to stand toe to toe, was good at finding the range and had deceptively great upper body defensive despite often fighting upright. The jab was a favourite that Sanchez liked to throw and he followed it up with combinations that few opponents could withstand. His mobility was also dynamic although he was shorter than Arguello at 5’6, giving away four inches in height in comparison to Arguello at 5’10. But Ernesto Arcel proved that a shorter fighter could give Alexis trouble when he was able to roll under the multi-weight champion’s punches and come up with big hooks. Sanchez could do the same.

Armed with a habitual and natural jab and taking into account all of the things that has been said above, I see Sanchez pulling it off with a late knockout over fifteen rounds. Say, the thirteenth.