The crowd was wild, the atmosphere pumped and Nathan Farrell was ready. Nothing could stop the confident Mancunian as he made his way to the ring for his professional debut.

Things were very different 4 years previously as Nathans frustrations were starting to spill over and he began on a downward spiral. After brother Kieran’s injury in the ring and their subsequent opening of The People’s Gym in Heywood things were turning a corner, when Nathan suffered a bad knee injury at a local football game he shrugged it off. There were no major plans in the pipeline and he figured it would be a wait on the NHS until it was fixed up. This would become a nightmare throughout the years as appointments and consultations were cancelled, rescheduled until finally he was told the awful news that as he’d been up and about for the past years, his knee was now destroyed and there was nothing he could do. 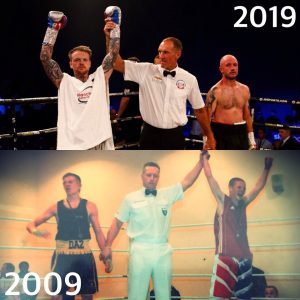 Made doubly worse as thoughts of a possible comeback had started to rise and Nathan had his own little stable of amateurs that were breaking through. Whilst helping others gain glory and stepping up to take over training some of Big Brothers professionals was gratifying, it could not fill the hole that he had for his own personal ambitions which cause many a night of second guessing himself and eventually led to a dark showery night where the youngest Farrell says he was sat in a field contemplating whether he wanted to even go on. He’d left the gym he loved, rowed with the brother(s) he’d give everything for and a darkness had engulfed him.

Thankfully he’s made of a lot sterner stuff than most of us are and the other thing he really likes doing is proving people wrong, and so began a battle that he knew he could win as those ‘haters’ that were waiting hoped he’d fail.

A training regime started at Premier Boxing Club in Bolton, continued at The People’s Gym as he became a regular sparring partner for many of the pro’s and would work on his fitness whilst the rest of us would be in the pub or watching the telly. He’ll be the first to tell you it wasn’t easy, and the darkness was waiting around the corner, but then he’d remember that he could do this, and not only would he do it, he’d shove it down the throat of everyone that didn’t believe in him and so the training would kick up a notch.

Until the man now known as the Naytrix (Nobody could unlock a way to beat him, in training, sparring or anything else in live) was ready. He was near peak fitness and was raring to go. Brother Kieran now signed as manager announced his debut to come at local Middleton Arena and the hype train kicked into overdrive. Tickets flew out the window as fans and haters alike flocked to see this enigma that was causing waves in the community. Then disaster, the Boxing Board hadn’t cleared his license in time and he would be unable to box. Nay was heart broken as once again the dream was cruelly ripped from him. A disappointed Nay offered refunds to all and sundry whilst also being on hand to congratulate the winners at the Middleton show as they were stablemates. 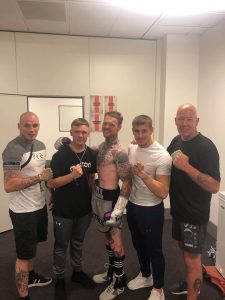 A few days silence and the Naytrix was back on social media back into training and vowing that those that had decried him and tried to humiliate him would be sorry and that this was only a minor setback. He roared through training and kicked everybody up a notch, this was his time and he’d refuse to lay down. People who had doubted him crept out of the woodwork to bray that he would never do anything and should have stayed with those youngsters he’d made champion as that was the only glory he’d taste.

The lion inside roared and Nathan kicked up another gear when his long-awaited debut was announced on Sky Sports for the undercard of Okolie vs Massey. The promotional train didn’t need to role out as tickets were snapped up the minute they went on sale and Nathan and Kieran had to order more due to demand exceeding supply. Murmurs abound as Nathan stayed composed and just told everyone to watch when once again disaster struck. The night was cancelled due to an injury to Massey and the debut we were all waiting for was on hold for the 2nd time. Apologies followed once again as Nathan was visibly shaken by the news, thankfully it was not to last as the following week his debut was announced for Aug 2nd, live on sky sports for the next generation show in Liverpool. Tickets would be limited and were snapped up by Farrell haters and fans alike and they all awaited his appearance. 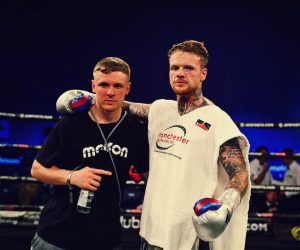 Standing in the ring, nerves could not be seen, a sharp, focused and supremely fit Nathan Farrell was about to show the UK and the world what he was about. I can tell you now that we weren’t disappointed, I’m fortunate to have seen the man spar and train but I was shocked with the difference in front of the lights. Nay belonged there, he ducked, he rolled, and he fought aggressively. His opponent could not have kept up with him if Superman had taken over his body for the 12 minutes he was in the ring with the Naytrix for. Like many before him he had no answer to the skills of one who had waited so long for this moment. And when it was over I guarantee you that those same people that wanted him to fail, were on their feets with those of us that knew he’d succeed all in celebration of one man who has started a journey that will surely end in world titles.