Last Saturday, Julio Cesar Chavez Jr knocked out Evert Bravo in the first round in San Juan de los Lagos with a left to the body. The fight was set in the light-heavyweight division at 175lb. The son of the legendary Julio Cesar Chavez Sr had been out of the ring for over two years since his lopsided points defeat to Saul Alvarez in May, 2017.

After he despatched Bravo, Chavez called out the likes of Gennady Golovkin and Saul Alvarez to come up to 175lb and face him. More recently, the Mexican has suggested that a fight with Alfredo Angulo could take place as early as this September. Angulo is yet to respond about that, but the odds are that it is unlikely to happen that quickly. 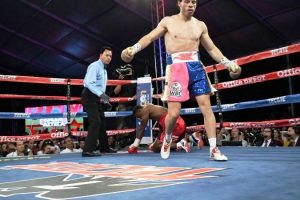 Chavez Jr looked good in stopping Evert Bravo on Saturday. But it didn’t say much.

Chavez has reassured everybody that he will become a world champion again, whether that will be in the light-heavyweight class or at super-middleweight. His record currently stands at 51-3-1 with 33 KO’s.

It is easy to understand why the fans have lost faith in him. While he does not quite possess the natural talent that he his father did, he still has plenty enough to create his own unique footprint. But his lack of devotion to preparation and doing what needs to be done and make certain sacrifices has been his downfall. Andrzej Fonfara became the first man to stop him over the course of 9 rounds after knocking him down which convinced him to retire on his stool between rounds. His penchant for blowing up in weight cost him when he had little choice but to fight the bigger Polish boxer and he paid for it, dearly.

Chavez Jr had his fighting spirit beaten out of him by Fonfara.

Even Chavez Sr made a statement in 2012 about his son’s lack of commitment.

“We have to improve many things. Things are not ok. I wanted that fight concluded, to have complete control of my son. He must see boxing from another point of view. If not, he will not develop,” he said.

After his first career loss to Sergio Martinez in September, 2012 he tested positive for marijuana which, yet again, indicated how seriously little he was about participating in one of the most physically taxing sports in the world. He ended up being fined $900,000 and received a nine month suspension. The late Jose Sulaiman had also made the claim that Chavez had a gambling problem and was using his fight purses to feed his betting addiction. Last year, he admitted he was a drug user and that he fell into a depression after losing to Martinez. He also felt that he had to admit himself for detoxification for alcohol.

So, as you can see it is a long road back for him. 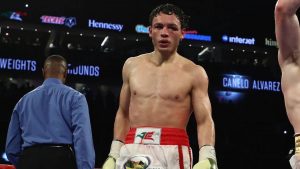 Can he win a world title again? Well, it is probably fair to see how he looks against a more dogged opponent. If the fight with Angulo happens then it should be known that he has only been active three times since 2016. And he has lost two of those three fights against Sergio Mora and Freddy Hernandez. It is not certain how much he has left although he surely will be a stiffer challenge than Evert Bravo.

There are some quality champions at both 175lb and 168lb such as Oleksandr Gvozdyk, Sergey Kovalev, Callum Smith, Billy Joe Saunders and Caleb Plant. But if there is anything positive to say, it is that Chavez looked strong and comfortable against Bravo. I don’t know if would be wise to take a risk and step down at all. 7lb can make a lot of difference sometimes.

Even if personal triumph in boxing ends up remaining only a fantasy for Julio Cesar Chavez Jr, at least has made a decent start by making some effort to get things back on track.

Let’s see if he can sustain that.