For somebody who did not go the standard route of domestic, European and world level Anthony Yarde put in an impressive effort against Sergey Kovalev for his WBO crown on Saturday night in Russia. Although the champion managed to end the fight in the 11th round with a sturdy jab, Kovalev found himself on the receiving end of blistering attacks in the 8th that saw him wobbled and in desparate need for the bell to save him. That it did, and unfortunately for Yarde it seems that he gave the very last of what he had left in the tank as he was unable to sustain the pressure in the subsequent rounds until he found himself on his back looking up at the referee who waved the fight off.

During the post fight interview with Steve Bunce for BT Sport, Kovalev interrupted to congratulate Anthony and told him that he will be a champion one day. Reassuring words from a man who has been in with some of the very best including Andre Ward, Bernard Hopkins and Jean Pascal! 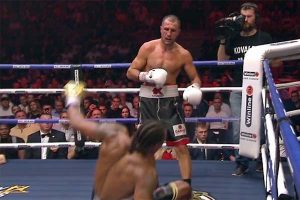 Sergey Kovalev stopped Anthony Yarde in the 11th round.

The odds were always going to be against the Englishman, but the former world title challenger stated that he loves a challenge. Nobody can say that taking on Kovalev without any experience and working their way up the ladder was not a challenge. But was it a foolish one? I have to admit, the thought crossed my mind before the fight. But in light of what actually took place, Anthony looked impressive, all things considered. And Sergey will have retained his belt knowing that he had to work hard to keep it. If he does get a fight with Canelo Alvarez then you might say he has worked doggedly to get it.

So, let’s look at what the WBO holder still has left and what is now gone. I think it is quite noticeable that he has lost that aura of invincibility that he once possessed. He is no longer the monster in the ring that he was about four years ago. But the power is still there, which is always the last to go. And he still retains a lot of the athleticism and a good jab. But opponents are seemingly no longer afraid to commit themselves against him. Kovalev is also 36 years of age now and his skills will inevitably erode before too long. He should have enough left to give Alvarez a good test. I will discuss more about that particular fight if it is signed sometime further down the road. 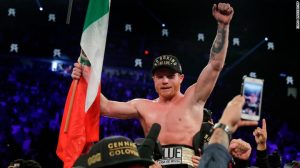 Is Canelo Alvarez next for Kovalev?

I think it is fair to say that Anthony Yarde shocked a lot of people with his performance. In all honesty, he was not winning the fight. He did not throw enough punches, was too easy to hit and could not figure out what Kovalev’s vulnerabilities were until the second half of the contest. He hurt Sergey to the body early in the fight but did not realise how much of an effect that had on him until he tried going for the same area in the 7th. He followed up his body punches with thuds to the head and the champion seemingly had no answer. Yarde put his foot on the gas in the next round and gave everything he had to try to put Kovalev away. Unfortunately, he just did not have enough to do that on that night.

Yarde shipped plenty of jabs and hard right hooks. We were all wondering how his chin would stand up to something that had put away twenty eight men before him. Well, it was a pleasant surprise to see not only Anthony taking his punches but fighting back and giving as as good as he got at various points during the bout. It was a dangerous thing to do for someone of his inexperience, but he told everybody that he had what it took to stand there and trade with the best of them. 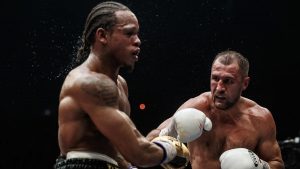 Yarde’s chin past the test.

Unfortunately, the one box Yarde did not tick was endurance. And it is understandable why. He had not fought past the 7th round before. Fighting for as long as he did was new territory for him. And although I would probably find anybody else’s punch resistance a little suspect if they were knocked out with a jab, I am convinced that Yarde did not make the count due to exhaustion. If you recall, he was unable to capitalise on the success he had in the 7th and 8th rounds. There was nothing left after that.

The good thing is Anthony Yarde ticked more boxes than he didn’t. And it isn’t too crazy to say that he showed real potential for the future. It is just all a matter of going back to the drawing board, picking himself up and then continuing to work for what he ultimately wants.

I am confident enough to say that he will make his dream a reality one day.