A huge night of boxing has been announced for the 02 arena on October 26th which is being headlined by Josh Taylor’s World Boxing Super Series fight with Regis Prograis. Other fights on the bill include Ricky Burns v Lee Selby and Lawrence Okolie v Yves Ngabu. Conor Benn will also be continuing his climb to world glory. But the one that has got mouths watering the most is Dereck Chisora against New Zealand’s Joseph Parker! The bill will be shown live on SKY Box Office.

2019 has really been a crucial year so far for Chisora. After his brutal knockout loss by Dillian Whyte in December of last year, it was imperative that he had to show everybody that he still had something left in the tank. He parted from long time trainer Don Charles and hooked up with Dave Coldwell in an effort to make new gym discoveries. Dereck’s first fight back against Senad Gashi in April was hardly a thriller, with him seemingly wanting to get some rounds under his belt and that he did when he let the fight go the full scheduled ten rounds in a so so affair. But it was his sensational knockout victory of Artur Szpilka in July in the 2nd round that convinced people that he had more to offer!

Joseph Parker has not really had much luck fighting in the United Kingdom. He unimpressed with his majority points win over Hughie Fury in 2017 and lost his huge contest with Anthony Joshua at Cardiff. Considered to give Dillian Whyte a stiff test, he looked largely negative in their 2018 fight except for the final round when he opened up and floored Whyte with a right hand upstairs. 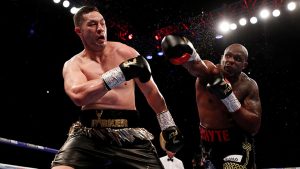 Parker had his next two fights in his home country and then in the US, winning both by stoppages against Alexander Flores and Alex Leapai. In May of this year, he signed with Matchroom. If Parker keeps winning then he should be granted another shot at the world championship, as stated by Eddie Hearn.

But right now there is no doubt that both Chisora and Parker are applying all of their attention to October 26th. They will have few options left should they lose to the other. The former WBO heavyweight champion has shown that he can be dangerous late in bouts and that nobody should ever take him lightly. He has good mobility, is okay fighting on the inside but prefers to box at long range. And he possesses good hand speed as well as endurance. 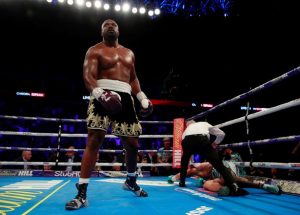 Under new mentor Dave Coldwell, Dereck Chisora’s career appears revitalised. The Finchley fighter’s boxing style looked predictable throughout his career, walking forward and throwing the big overhand right or electing to stay on the ropes and trade on the inside with his opponents and making his fights more difficult than they should have been. Against Szpilka he got the jab going, looked focused and threw an array of punches that the Polish fighter couldn’t handle in the 2nd when Chisora landed to his body, causing him to drop his hands and then had to take a huge right hook upstairs that caused him to go crashing down. The old Chisora would probably have just focused on his head, landing single rights in the hope that a heavy one gets through.

It is a tough one to call, and that is what makes this one intriguing. Parker and Chisora both have good punch resistance although it is hard to know how much of that Dereck has left after his crushing knockout loss to Whyte. There is everything to gain and lose, which I am sure they are aware of.

But the pick here is that an attentive Dereck Chisora applies too much pressure for Parker to handle and is the busier fighter, which leads to the judges to elect him as a clear winner on points after a lively affair.